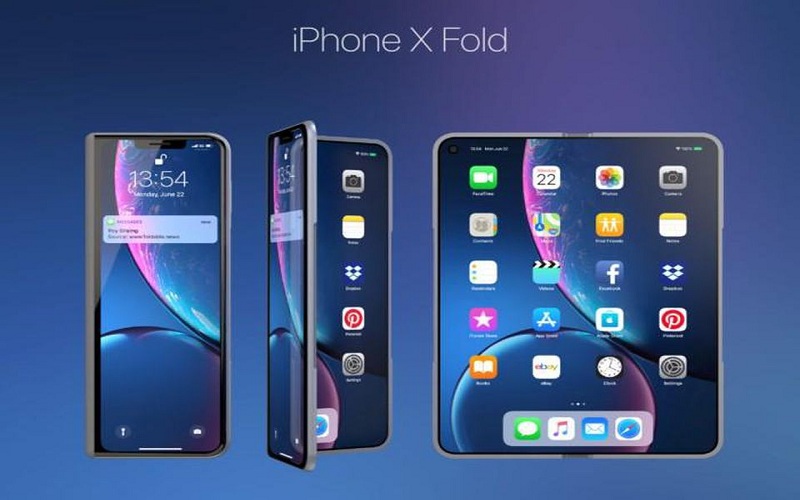 Apple already has three new iPhone models lined to be launched in September this year and there is already a high buzz about it in the market. But recently according to a report by Patently Apple, the Cupertino tech giant is working on its more ambitious iOS devices and that will be foldable iPhones and foldable iPads to cop-up with the trend of foldable phones by the competitors. It’s also being said that iPhone 11 might have Bluetooth Dual Audio feature just like Samsung.

Apple has reportedly been granted a new patent for “foldable cover and display for electronic devices” by the US Patent and Trademark Office this week. The patent report file reveals not only about the extensive and radical configuration but how it is considering it.

Apple is working on to create a display that will have a flexible region and a protective cover layer on top using ceramics, possibly made up of ceramic material like toughened glass, sapphire or zirconia for the protection of flexible display from any potential damage. This shows Apple is planning a step ahead than Samsung and Huawei in terms of foldable smartphones as their phone use simple plastic panel.

With this innovative approach, Apple has proved that it is possible to build importantly more extensive folding form factors than the phones we have seen till date. Apple has shown radical dual and triple folding designs. The flexible cover layer may also offer support for both the folded and non-folded regions of the device. Simply, any foldable device could be folded to accommodate various form factors.

Samsung and Huawei are the first mobile phone makers to introduce foldable smartphones at Mobile World Congress in Spain this year. Samsung wanted its Galaxy Fold device to be reviewed by the reviewers before launching it for the public but it grabs mixed reviews from different tech experts. On the other side, Huawei has Mate X as its foldable Android phone but recently its name has been put on the US tech blacklist that puts its foldable smartphone into trouble.

Well, this tech is still in the work and seeing the other brands have already announced their foldable devices to be launched later this year, Apple may showcase its foldable iPhone and iPad next year or in 2021. But right now Apple is set to launch its new major iOS update in WWDC 2019. iOS 13 beta is expected to be released at this event and full run-down of iOS 13 might be released with the launch of iPhone 11 in September. Apple has never let us down in terms of innovation; let’s see how it will amaze us.