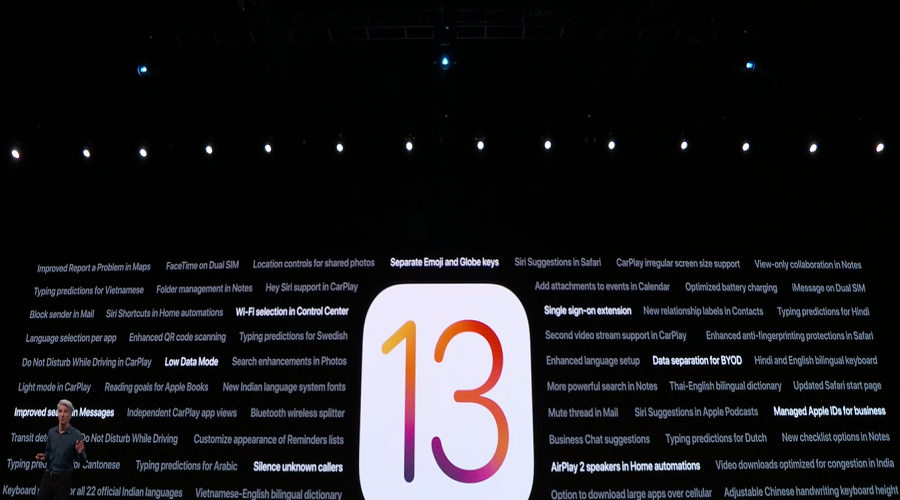 Apple has announced the next software update for iPhones and iPad callediOS 13 and iPadOS respectively at the keynote event of WWDC 2019. We also show App unveiling tvOS, macOS Catalina and watchOS 6. The new iOS 13 update will support iPhone 6s and later iDevices. Apple has dropped support for iPhones 6 land earlier iPhones. Apple announced an OS exclusively for iPad named iPadOS. The new iPadOS will be available for iPad Air 2 and the next released devices, iPad mini 4 and later all iPad Pro models, and iPad 5th generation and later. Apple claims that the iOS 13 will offer some advanced privacy features along with several other cool features including Dark Mode, photo & video edit, and several updates in Mail, Reminder, and Notes.

iOS 13 will be launched in the fall this year with the launch of iPhone 11. But Apple has currently rolled out iOS 13 developer beta version for testing purpose and you can install iOS 13 beta on your compatible devices. Apple knows it has a very large number of users in India so keeping this in mind it has offered several features for Indians with iOS 13. But here are some features that Apple has exclusively added for its Indian users in iOS 13.

With iOS 13, Apple has tried to please its users all around the world and Indians are no exception from it. Apple has provided Hindi-English bilingual keyboard where users can use and switch to each language in keyboard with one click for convenience.

3. Keyboard for All Official 22 Languages

iOS 13 supports all Indian languages and users can use the keyboard in their own language. Apple is going native here, to make iPhone more domestic it has added all the major official Indian language and its keyboard with iOS 13.

As we said earlier, a Hindi language keyboard will be added to the iPhone with iOS 13. According to the keynote of WWDC, the feature of typing prediction with Hindi keyboard where you will get the next suggestion of words and smart keyboard will learn from your typing style.

With iOS 13, Apple has added four new system fonts for Gurmukhi, Gujarati, Odia, and Kannada. This will add more offer better clarity while reading in Safari, Messages, Contacts, or Mail.

Now with iOs 13 users can select multiple languages according to Apps. Users will be allowed to select language per app. So it will be more convenient for Indian users who want to use any app in their native language and some apps in English.

So these are the main features that have been added in iOS 13 keeping in mind the easement of Indian fans of Apple iPhone. Though the OS update is still in beta mode and we hope to see some more significant changes in the final version of iOS 13 at its official release this fall.

Is Apple Keeping Some iOS 13 Features Behind the Curtains Before iPhone 11 Launch
Mac Pro & Pro Display XDR 2019: Everything You Need To Know
Comment