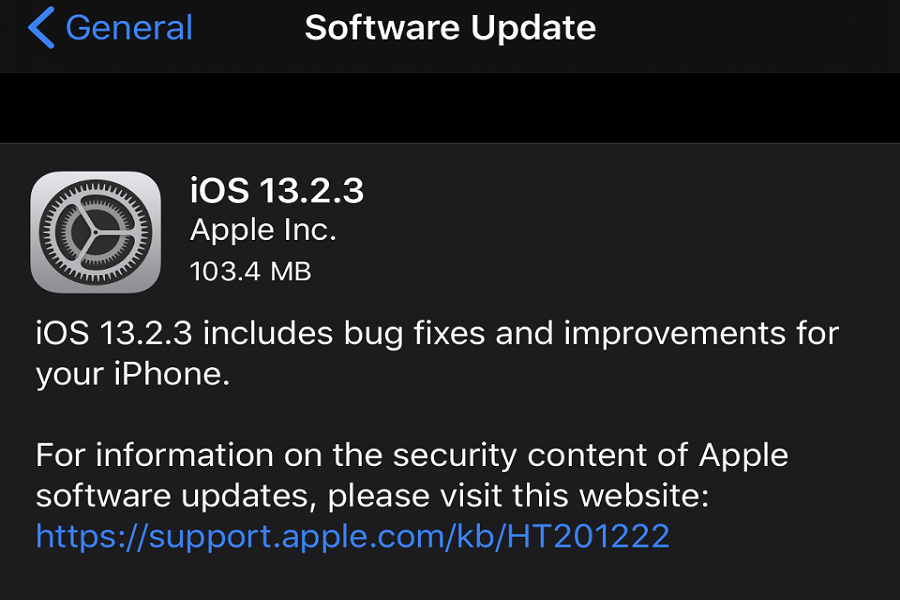 It seems like bugs are increasing with every new iOS 13 updates since its release at the Apple’s September Event. It’s been around 2 months since the launch of iOS 13. Still, bugs and glitches are not falling at Apple is trying to fix them by releasing new iOS 13 updates. So recently, Apple decided to release another update iOS 13.2.3 to fix some bugs and make some improvements.

Apple’s new iOS 13.2.3 update is now rolling out for all iOS 13 compatible devices with the download size of only 90MB and different from devices.

Want to download iOS 13.2.3 update? If your device is compatible with iOS 13.2.3 update, then can go to the Settings App on the device and then choose General, then Software Update. Once you’ve clicked on Download and Install. That’s it!

As you have seen above that the update came with some fixe some background bugs, the issues is now fixed. The system search in Mail, Files, and Notes wasn’t working, which has also been fixed with the new iOS 13.2.3 update.

There was an also issue in the Message detail views where photos and links haven’t shown properly. So, the update will also fix this problem.

In the previous update, people were not able to get new messages or couldn’t able to add original message content in exchange accounts in Mail. So, the new iOS 13.2.3 update also worked well to fix this mail error.

Well, Apple tried to fix some bugs and make some improvements with the new iOS 13.2.3. Some minor bugs fixed with the update, but many more to fix in the future with iOS 13.3 update, which expected to come in December.

Once after updating your device to the latest iOS 13.2.3 update, please do not forget to share your feedback with us in the comment box. In a case, if you notice more bugs or new exciting features in iOS 13.2.3, feel free to share it with us.

Apple is Holding a Surprise “Special Event” on December 2
Apple’s got some revolutionary offerings for the future – Apple Cars, Glasses, and faster iPhone
Comment