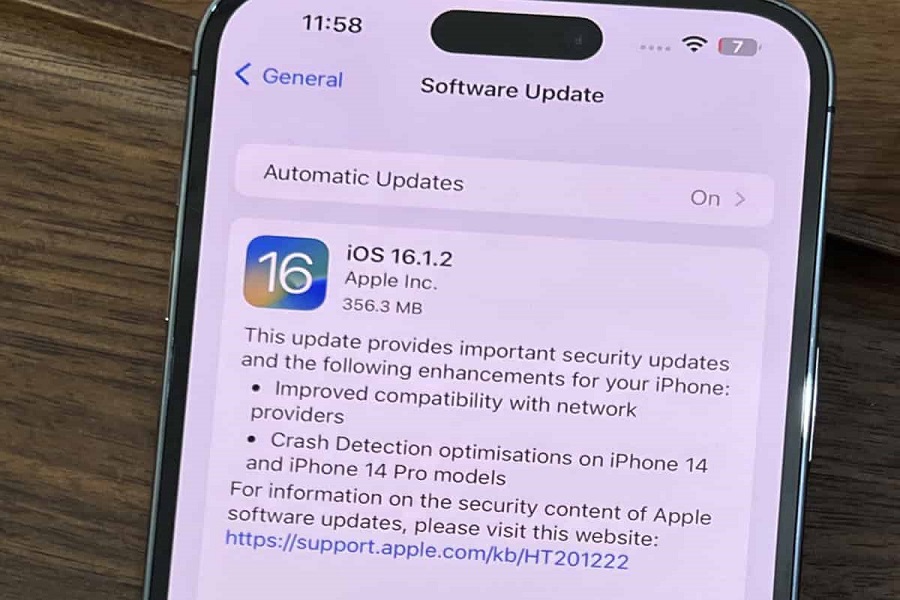 Apple’s iOS 16 software update is in the play and recently iOS 16.1.2 was released giving us minor feature updates and security patches. IOS 16.1.2 is available to the public now and can be installed on all compatible devices.According to Apple’s release notes, there are 2 enhancements apart from all the security patches. The two enhancements are improved carrier compatibility and crash detection in the iPhone 14 series.

There have been issues reported where the iPhone would lose the range of carrier services and would disconnect automatically. This was later revealed that it might be due to the bug that caused the disconnectivity. With iOS 16.1.2 update Apple has finally solved this issue and given its users more improved carrier compatibility with the wireless providers. According to Apple’s press release, customers will benefit from improved compatibility with their cellular carrier. I’m not sure what impact it makes because the modem firmware version hasn’t changed yet, but we can surely hope that this improvement will be noticed soon on our device.

Apart from improved compatibility with the wireless carriers enhancements, iOS 16.1.2 has also brought a fix for crash detection.The new iOS 16.1.2 update improves crash detection specifically for iPhone 14 models. Crash detection improved features on the iPhone 14 and iPhone 14 Pro models. Apple appears to have figured out how to keep crash detection from incorrectly activating when riding roller coasters. As a result, because this feature detects a crash using G4 sensors and other data, Apple disclosed that roller coasters tricked the system, causing it to contact Emergency Services just by riding a roller coaster. The method that determines whether or not a user has been in a car accident has been updated in IOS 16.1.2. Now, this feature won’tbe mistaken into assuming you are in a crash when in reality you are enjoying on a roller coaster.