Home » How to use background sound in iOS 15 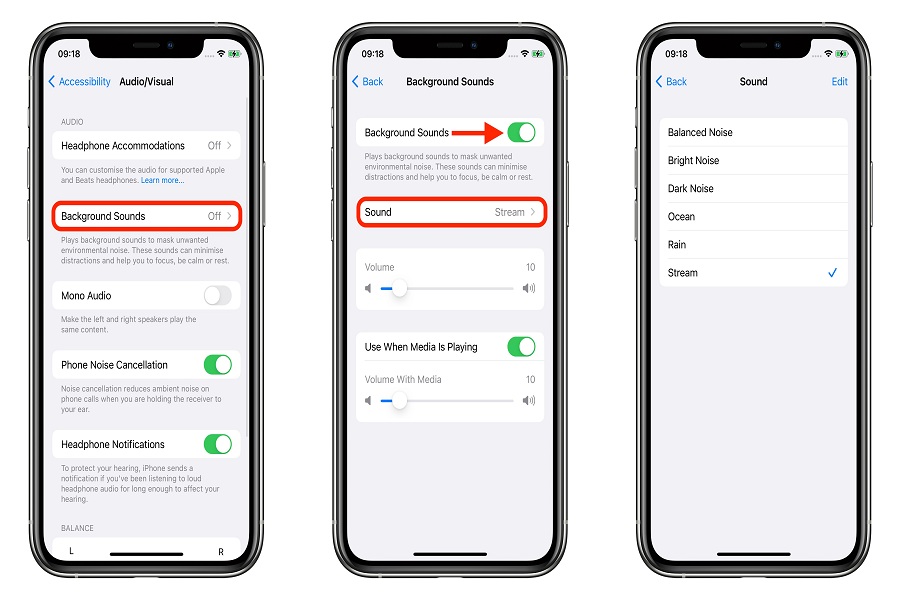 Background Sounds are designed to help people stay focused and stay calm. With the help of an iPhone or iPad it will also help people to avoid getting distracted, overwhelmed or discomforted by what’s going on around them.

With this new accessibility feature  your iPhone will be able to play balanced, bright, and dark noises as well as calm soothing natural sounds like ocean, rain or stream so that you can rest, gather your calm and focus on the task at hand. These sounds can also be played in the background to mask unwanted environmental or external noise and the sounds mix into or duck under other audio and system sounds.

Background Sounds is a new and exclusive feature that is only working if your device is running iOS 15 and iPadOS 15. At the moment both iOS 15 and iPadOS 15 are only available as a beta for only selected iPhones and iPads.  If you wish to try the background sounds in your device, you need to install iOS 15 or iPadOS 15 on it and we would strongly advise against doing that as you may encounter bugs and issues in these early developer beta versions.

To check which version of iOS or iPadOS your device runs on, you can do that by opening the Settings app and going to Settings → General → About → Software Version.

You will need to download the sound effects for the first time after that you can play the background sound whether you’re online or not.

To enable it access the ‘Background Sounds’ screen by  Settings > Accessibility > Audio/Visual > Background Sounds > Toggle ON the ‘Use When Media Is Playing’ switch. Now you will get separate volume slides when Background Sounds are played with media and you can increase or decrease the volume by dragging the slides.

To access the background sounds the easy way you can add a shortcut to the Control Centre. It will appear under the hearing control of the Control Centre. Tap on it and you can access all the functions easily from here and enjoy the relaxing feature provided by the company.

iPhone 13: What To Expect
How To Change Mouse Cursor Color On MacOS Monterey
Comment