Home » FaceTime and Phone Call Recording Feature Coming To iOS 14: Worth or Worst? 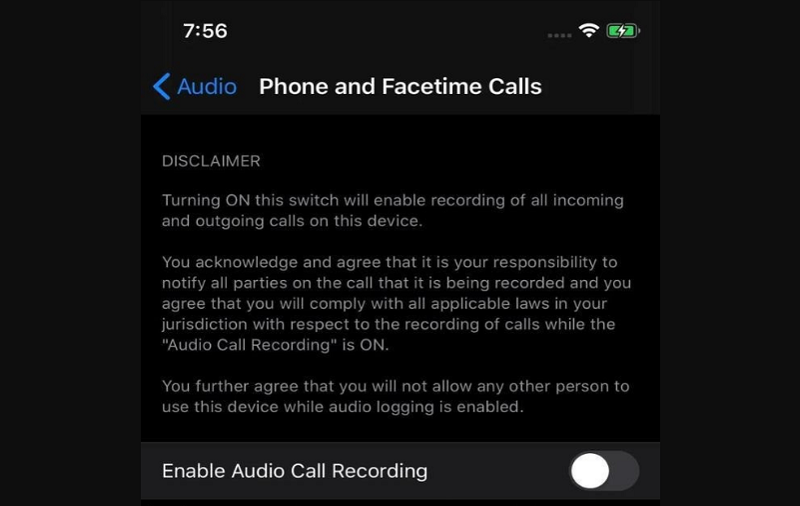 Would it be okay if someone is keeping every track of your every call or FaceTime call record? Of course, you would file legal action against that person or the company that is recording your call records.  You would be wondering why we are talking about this after all; no one is recording your personal call. But, what if Apple is adding that feature on iOS 14. What would be your reaction?

I guess you won’t like this feature at all, even me as well. But we here are to tell you that Apple is now working on this feature. According to the report from ITHOME, Apple is adding the phone call and FaceTime recording function on iOS 14.

Yes, you heard it right! The report from ITHOME claims that the Jailbreakers team has found the leaked internal iOS 14 image, which has the setting that will let users record their phone call as well as FaceTime audio on their iOS device. And we have the proof with the screenshot of that setting, which you can see in the feature image.

As you can see the image which says that “Turning ON this switch will enable recording of all incoming and outgoing calls on this device” and also added “You acknowledge and agree that it is your responsibility to notify all parties on the call that it is being recorded and you agree that you will comply with all applicable laws in your jurisdiction concerning the recording of calls while “Audio Call Recording” us ON.

After reading this statement, it is clear that Apple will not send any notification to the person who is receiving and making calls that they are being recorded. They clearly said that it is the caller’s job to make sure that their call is being recorded. I guess that is worst.

It is still under the hood of how the company will deal with all legal actions. But if we talk about call recording features in the UK, it is legal to record phone calls for yourself, but when it comes to sharing, you are not allowed to share those recordings with anyone without the consent of the person recorded. Call recording is also legal in Australia, but you should inform the other person that they are being recorded. Hence, for this time, they are adding this feature only for US users, and they will see how people are using this feature, and then they will think about adding it for other users around the world.

If you are wondering when Apple is releasing iOS 14, then let me tell you that you are only a couple of weeks away as Apple is holding an online WWDC event on June 22 when they will announce iOS 14 along with watchOS 7, tvOS 14, iPadOS 14 and macOS 10.16.

What are your thoughts about reading this article? Don’t you think this something you would never want? If you have something in mind, please feel free to share it with us through the comments!