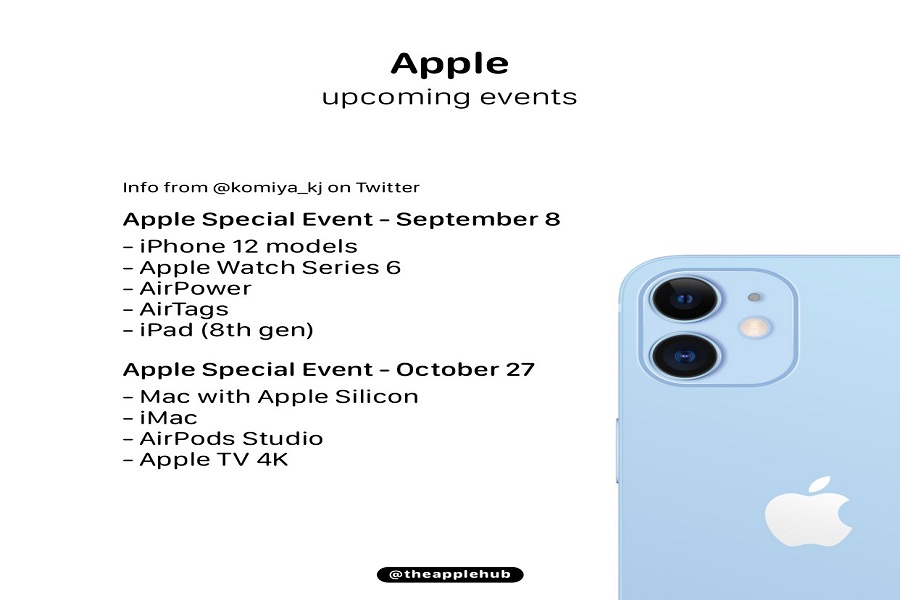 It seems like everyone is very keen on Apple’s Special Events as a lot of rumors roaming everywhere about the date of Apple’s upcoming event. We also heard a lot about iPhone 12 as we are coming to near to the release of Apple’s next iPhone. But until now, there wasn’t any news or rumors about the Apple Special Event date.

Recently, the news about the release date of iPhone 12 models came to the highlight when the popular leaker Apple Hub posted the leak date of Apple’s upcoming event by one Twitter user @komiya_kj.  According to them, there would be two virtual events this fall due to the coronavirus pandemic.

As per the image posted by the leaker Apple Hub, one Apple Special Event will be held on September 8 where they announce the iPhone 12 models, Apple Watch Series 6, AirPower, AirTags, and iPad (8th gen). And another Apple Special Event would be on October 27 where Apple may release the Mac with Apple Silicon, iMac, AirPods Studio, and Apple TV 4k.

Here’s you can see the tweet from the Apple Hub:

The after this tweet, they also posted another image which claims that the TrueDepth camera in macOS Big Sur, which could indicate that Face ID could come to future computers. We know that it’s very early to predict it, but we can’t stop talking about it.

Earlier, they also tweeted that the new report from Mac Otakara indicates that Apple would release the iPhone 12 models in October because of the ongoing COVID-19 pandemic.

According to the rumours, there would be a total of four iPhone 2021 models to release this year. There would be two lower-end iPhones 12 which includes iPhones 5.4 inch and 6.1-inch and another two include 6.1-inch and 6.4-inch iPhone 12 Pro models which would be higher-end devices.

The popular website mobilelaby also reported that the iPhone 12 models would have 10% less battery life compared to previous iPhone 11 devices. So we very excited to know how Apple will manage it 5G iPhones in the small battery life.

Do you have something exciting to share about the iPhone 12? What do you wish to see on the next iPhone 2021 models? If you have something in mind, then please do share it with us in the comment box. Stay tuned for more news and updates!