Home » WHAT IS “APPLE PAY HAS BEEN SUSPENDED TEXT” MESSAGE? 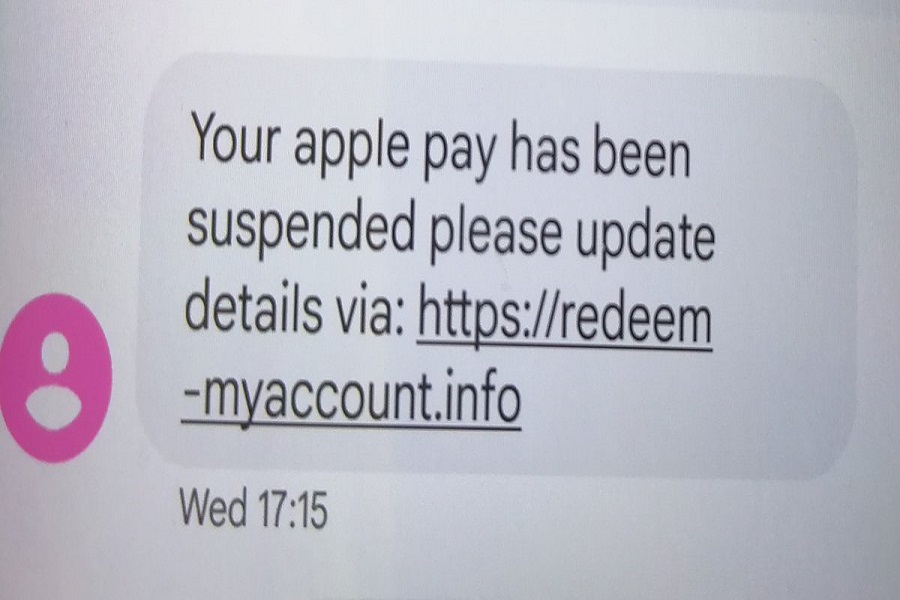 Since quite some time online fraud is at the highest!! As we move forward with technology and its security, the scammers also get ahead with their different and new ways of scamming people. Scammers are trying out different ways to get people fooled and have their bank details or other data by just a click. Online transaction has increased, and the company’s providing online pay options have done their best to make contactless payment options, such as Apple Pay and Google Pay, safer and faster way to pay.

Apple Pay is a secure and safe wallet application. But still Apple Pay frauds are on the rise, and customers should be cautious. Scammers send SMS messages claiming account suspension, fraudulent invoices, and false Apple support messages, among other things. They will attempt to steal money by obtaining bank and personal information. They try to deceive users in various ways, attempting to defraud by obtaining personal information.

DID YOU GET “APPLE PAY HAS BEEN SUSPENDED” TEXT MEAASAGE?

Recently many iPhone users have claimed about receiving a text message which says that their Apple Pay has been suspended. Apple has stated to be aware of such text messages as they have not issued any of this sort, and neither the text claims are true. If you got this text message then you should avoid doing any activity with that text and instead directly report it to the official site of Apple.

IS THIS TEXT MEASSAGE LEGIT?

NO! Rumoured hackers are attempting to obtain Apple ID log-in data from iOS users by warning that the Apple Pay function on their iPhone or iPad will be disabled soon. They exploit the stolen iTunes accounts for illegitimate operations such as spamming, phishing, and other black-market activities.

This is a scam text message going around and you don’t need to respond to those text message. If you respond than there is a high chance of exposing your online and bank details to scammers. Apple has not forwarded any such kind of message and neither apple pay is suspended.

FEW SIGNS YOU SHOULD BE AWARE OF!

Emails and other messages that appear to be from official site, such as Apple but they are not, ads and pop-ups that claim your device has a security concern are false, phone calls or voicemails purporting to be from Apple Support are a scam. Promotions that offer free items and prizes but aren’t real, Calendar invites and subscriptions that you don’t want.

The SMS usually comes from a random number and not officially from Apple, despite the fact that scammers may get to fool you by having authentic phone numbers. The URL itself is unusual since it leads to a random website rather than Apple. In email correspondence from Apple, you will never be asked for your iTunes account log-in credentials.

If you get a text claiming that apple pay has been suspended don’t respond. If you click the link, you’ll be directed to a page that appears to be real and claims:

‘Apple Pay was suspended on your device. You can continue to make contactless purchases once you have reactivated your wallet.’

After you’ve entered your username and password, you’ll probably be asked to give further personal information. Your birth date, address, and complete name are frequently included, as well as bank account and credit card information in many circumstances. Scammers may be able to access your bank data and steal your money if you disclose these details on this fake site.

WHAT SHOULD YOU DO IF YOU RECEIVE SUCH TEXT?

If you get an unexpected SMS or email suggesting that anything is incorrect with your Apple Pay account, check into it on your iPhone or directly contact Apple official help centre.

If you receive a text and suspect something isn’t quite right, don’t click any of the text’s hyperlinks, neither respond to any. If you do so they’ll take you to a clone website that appears just like Apple’s official site. Your log-in information will be requested via a form. By providing them, you are putting your Apple ID and password in the hands of scammers!

So, for your own safety don’t respond to any of the text nor click any unfamiliar links. You should report phishing emails to Apple at [email protected].

Never disclose your password, any kind of otp or verification information with anybody, and never utilise any links in the message. Report suspected emails impersonating Apple to [email protected] . You may also ban unwanted texts and calls as well as report suspicious iMessages by pressing ‘Report Junk’ under the message.

TagsAPPLE PAY HAS BEEN SUSPENDED TEXT