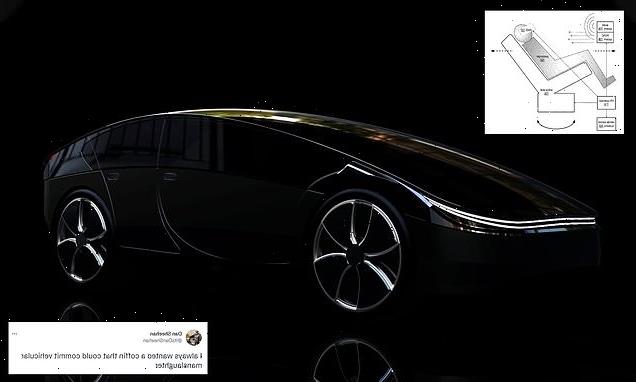 Apple is the only company that can easily market a windowless self-driving vehicle with no steering wheel to the public! Yes, you heard it right. Apple has been planning to launch their car, but the major plot twist that you will find here is that the car may be windowless. The Apple Car might be a reality soon. In 2015, it was rumoured to be an electric automobile under Apple’s ‘Project Titan.’ However, we have heard that Apple has now applied for a windowless in-car virtual reality entertainment system.

EVERYTHING YOU NEED TO KNOW ABOUT APPLE CAR PATENT

Apple has filed a patent application to incorporate virtual reality systems in its self-driving vehicles, which would replace windows. Apple’s self-driving cars, named “Project Titan,” are said to have been in the works since 2014 but have been continually delayed.

Apple filed a patent earlier this month for an in-car VR system that would replace the “view of the actual environment with virtual surroundings.” This VR system would “match virtual sights that match visual signals with the real motions that a passenger perceives”. Apple claims that windows are often dangerous and expensive. It stated that a virtual reality system might “reduce or eliminate the necessity for windows in driverless automobiles.” It further claimed that a VR system might make the car appear bigger, providing passengers with a “more comfortable and secure-feeling experience.”

WHY APPLE IS PLANNING ON WINDOWLESS CAR?

Motion sickness is caused by sensory conflicts, which occur when our eyes register movement but the rest of our body does not. So, the Apple Car will not have windows in order to avoid motion sickness, but passengers will be able to have a window-like experience through their phones. VR headsets that would have access to cameras positioned on the car’s outside. The technology might also be utilized to view films and read books in a safe atmosphere, as well as to have virtual meetings while traveling.

OTHER FEATURES OF APPLE CAR

The automobile is intended to be fully self-driving, and it is rumoured that it would function just like an Apple iPhone. The automobile would also be able to park itself at a given spot with the assistance of Apple’s AI speech assistant Siri.

According to several patents obtained by the tech industry, Apple may hide the steering wheel of the automobile and only reveal it in an emergency. It may be delivered without a steering wheel or pedals. According to rumours, the vehicles would also include a huge iPad-like device that will function as an infotainment system.

To put it in simple words if the automobile was accelerating down a slope, the system might display a simulated rollercoaster ride. It gives you feeling of going down the slope as you cannot see outside view.

According to the patent, the seats in the automobile would move to match the graphics, much like an immersive ‘4DX’ theatre experience. However, passing sights of the actual world – such as a lovely medieval church or breath-taking coastal hills – would be completely replaced by virtual visuals.

As you already know Apple items are of high quality, so high pricing is to be expected. You’re looking at anywhere from $40,000 to $170,000. If there are many models to choose from, there may be a lower-end model that lacks auto-driving or does not feature the same conveniences as the more costly versions.

According to sources, Apple hopes to begin automobile manufacturing in 2024, but Apple analyst Ming-Chi Kuo believes it will be 2025 to 2027 at the earliest before an Apple Car is ready for introduction. Kuo predicted that the launch date will be pushed out to 2028 or later.

That’s all for today folks! Let us know your views regarding Apple car. Do you think making a car windowless will be a new trendsetter or just another failed product. Comment down below your ideas regarding this new technology.

iPhone 14 Release Date, Price, Features, and Leaks
CAN YOU SCHEDULE A TEXT ON iPHONE?
Comment