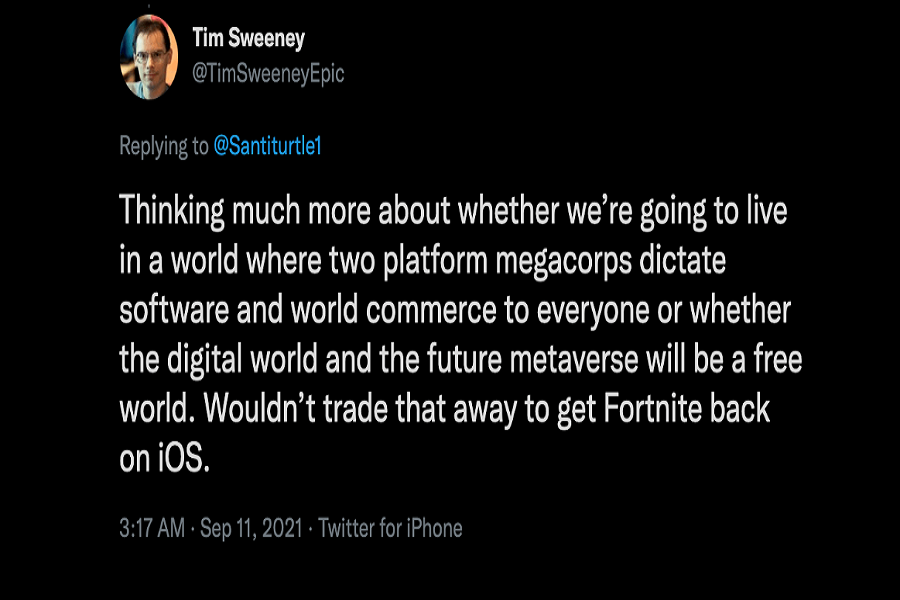 The never-ending war is still going on between Apple and Epic Games. After Apple banned Fortnite from App Store last year, every Fortnite iOS user is still when Fortnite is coming to iOS. It’s been over a year, and 2021 is about to end, but the legal battle is still going on, and now users are asking will Fortnite come to iOS in 2022.

Everything was going well, and we were expecting Fortnite to release on App Store in September 2021. But all of the suddenly changed when Epic Games founder Tim Sweeney tweeted about Apple’s lying.

He wrote on Twitter “Apple lied. Apple spent a year telling the world, the court, and the press they’d “welcome Epic’s return to the App Store if they agree to play by the same rules as everyone else”. Epic agreed, and now Apple has reneged in another abuse of its monopoly power over a billion users.”

Epic Games also released the press note on its news page where they wrote everything about Apple’s betrayal with the tagline “Apple lied, breaks its promise to allow Fortnite back on iOS under its rules”

When Apple again rejected the to bring back Fortnite to IOS App Store request, Apple inform court that,

Following the Court’s decision, Mr. Sweeney stated publicly that “Fortnite will return to the iOS App Store when and where Epic can offer in-app payment in fair competition with Apple in-app payment, passing along the savings to the consumer. He continued: “Thinking much more about whether we’re going to live in a world where two platform megacorps dictate software and world commerce to everyone or whether the digital world and the future metaverse will be a free world. Wouldn’t trade that away to get Fortnite back on iOS.”

Following these recent news, imore wrote “Based on these and other statements, which make clear that Epic has no intention of complying with Apple’s Guidelines notwithstanding any protestations to the contrary, Apple advised Epic that it would not be reinstating Epic’s Developer Account or the Fortnite app.”

When will we see Fortnite back on iOS?

There is still no chance of getting Fortnite back on the iOS App Store, but news suggested that NVIDIA and Epic Games plan to bring Fortnite for iPhone. With the help of NVIDIA GeForce, users will be able to sideload Fortnite from the official NVIDIA website.

Apple won’t let Fortnite back on iOS until the Apple vs. Epic Games verdict is final. So this article was about the recent series of events between Apple and Epic Games.

What do you think about this war? Do you think Apple should accept Epic Game’s conditions? Please share your feedback in the comment box.