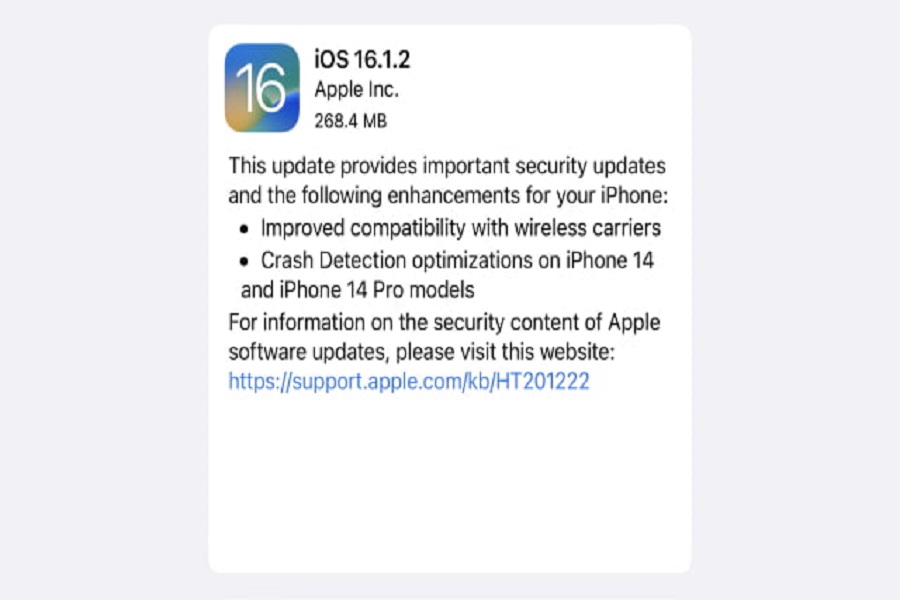 Just three weeks after the introduction of iOS 16.1.1, Apple has released iOS 16.1.2 to the public. This is an iPhone only update, and no additional updates were issued alongside iOS 16.1.2. If you are upgrading from iOS 16.1.1, this update should be roughly 335 megabytes; however, the size of the download may vary based on the iPhone model you are using and which version you are upgrading from. This update’s build number is 20b110. So, in terms of what’s new in iOS 16.1.2, let’s take a look at what this update has in store for us.

I don’t think we should be expecting that much from iOS 16.1.2 as this is mostly going to be bug fixes. According to Apple’s release note, there are only a few changes and major changes in security patches. Aside from the crash detection feature, and improved compatibility of wireless carriers there is not much in this update.

Crash detection improvements on the iPhone 14 and iPhone 14 Pro versions:

Crash detection improvements on the iPhone 14 and iPhone 14 Pro versions with the new iOS 16.1.2 update. Apple appears to have finally found out how to prevent crash detection from falsely triggering when riding roller coasters. So, because this function detects a collision using G4 sensors and other data, Apple revealed that roller coasters deceived the system and caused it to notify Emergency Services just by riding a roller coaster. IOS 16.1.2 has modified the algorithm that determines whether or not a user has been in an automobile accident.

Compatibility with wireless providers has been improved. According to Apple’s release notice, consumers will enjoy greater interoperability with their wireless provider. I’m not sure how it makes a difference because the modem firmware version hasn’t changed.

Patches for security that came with iOS 16.1.2. This release contains critical security upgrades. However, Apple has not yet specified what the security patches are. Apple will most likely need a day or two to publish the security updates and bug fixes included in the latest iOS 16.1.2 release.

Airdrop has a time limit. As China has previously observed, there may be a limit for the Airdrop link. Airdrop will now have a 10minute connection from everyone instead of just simply connecting to everyone without any time limit. This might be referred to as the iOS 16.1.2 secret feature. This update has been implemented to assist prevent the spread of misinformation. This modification has yet to be implemented since it is still displayed as everyone rather than everyone for 10 minutes.

That is iOS 16.1.2, a small bug patch update that mostly fixes the significant problem with the iPhone 14 series and crash detection being triggered by a roller coaster. Let us know what you think about iOS 16.1.2 update in the comments section down below.