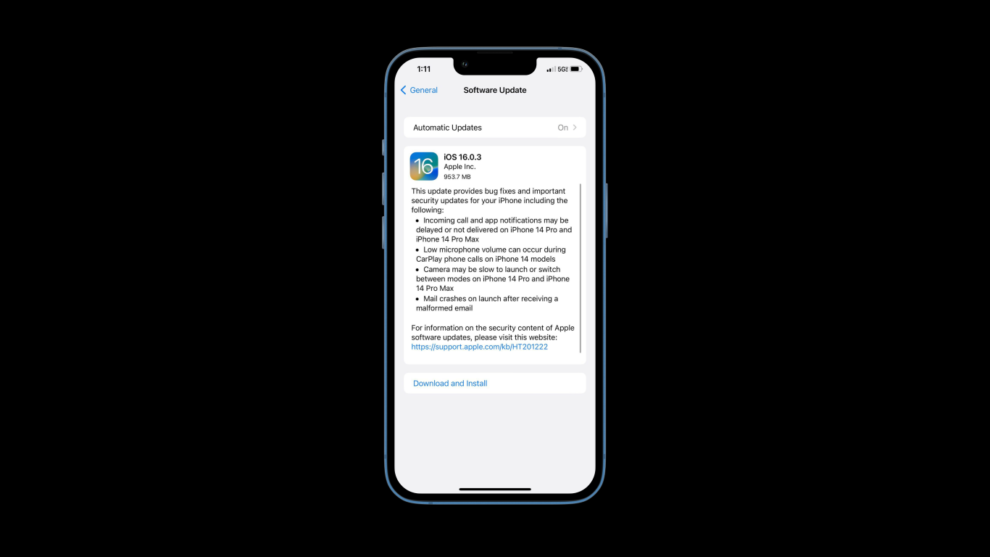 The iOS 16.0.3 update is now available for download. If you have an iPhone 8 or a later model, you should have this update installed. You may upgrade your smartphone by navigating to the settings app’s software update area. The iOS 16.0.3 upgrade took 1.21 gigabytes on the iPhone 14 Pro Max; the gigabytes may vary depending on the iPhone model you have. iOS 16.0.2’s build number is 208392.

This update also fixes the Apple CarPlay bug. If you were using Apple Car Play and people couldn’t hear you, you needed to reduce the microphone level, which should be rectified in this version. Many customers claimed that no matter how loud they yelled, the person on the other end of the phone conversation could not hear them very well, regardless of how much they cranked up their volume or how loud they talked. So it was a bug, and Apple notes here that on iPhone 14 models, the low microphone volume can occur during vehicle play phone conversations.

When you start the camera app on an iPhone 14 model, it may take some time to launch or switch between cameras. This is being addressed in the iOS 16.0.3 version. With the release of this software update, users will no longer have any problems using the camera program; in fact, using this application will be considerably smoother while utilizing the camera, video, or any other incorporated functions.

They also solved an issue on all iPhones where mail might crash on launch after receiving a malformed email with this update. After receiving a faulty email, the mail program would crash on startup. Not only would it crash on launch, but this issue would also lock you out of your mail application for good unless you erased the email on another device. The mainprogram would break upon startup. This bug was known as mail Jack, and it was an email maliciously crafted from the field you know when you get an email that shows from that’s where it was maliciously crafted and it would cause mail to crash and you wouldn’t be able to reopen it until you logged on to that email account on another device and then deleted that email, which has been fixed here with 16.0.3.

In terms of more fixes and adjustments, Apple hasn’t said anything specific, which is a bit disappointing. If you have an iPhone 14 Pro or iPhone 14 Pro Max and you are seeing low brightness level flickering while your iPhone was set to a lower medium brightness in the display’s dark parts. Because several users experienced flickering, they have not said whether or not they have resolved this issue.

Many customers have reported problems with Wi-Fi in general not working. As a result, Wi-Fi would simply disconnect and cease to function. We are hopeful that the iOS 16.0.3 release will resolve this issue as well.

That’s it, folks! As far as the software update goes iOS 16.0.3 is a pretty solid update with bug fixes that are recommended. One question is still left unanswered by Apple will iOS 16.0.3 fix battery issues or not? Since Apple has kept its lips tight regarding this issue, users might just get an update and notice the difference on their own. If you have noticed any other changes in iOS 16.0.3 do let us know in the comment section down below.