Home » Should You Download Tweaked Apps from Zodhelper on iOS? 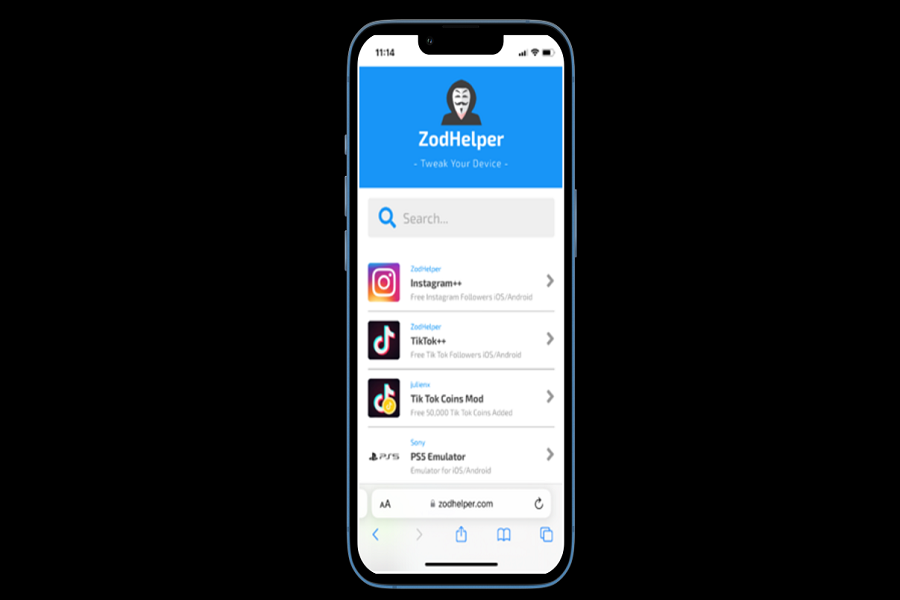 If you are a bit tech savvy and are interested in iOS tweaked apps and games, you might have heard of apps like TuTu App, Cydia, and many similar others.

Zodhelper is an alternative to TuTuApp, App Valley, GBA4iOS, and many similar platforms. At first glance, Zodhelper seems like Modhelper and even Google suggests it in its “Did you mean:” section as Modhelper.

However, the question remains the same: should I install tweaked apps from Zodhelper on my iOS? I’ll be giving you the answers so that you don’t have to go through any trouble.

As stated in the introduction, Zodhelper is a webapp similar to Tutu App, Cydia, and App Valley. It is like a third-party app download and an alternative to the Apple App Store where you can download tweaked apps including Instagram++, TikTok++, Tik Tok Coins Mod, PS5 Emulator, Subway Surfer iOS Hack, Google Play Store iOS install, Roblox Mod, and a hundred more apps.

However, you should keep in mind that Zodhelper is not recognized by Apple and it is not available on the App Store, so you have to download it from the Zodhelper website using the profile installation method on iOS.

In a nutshell, it is a third-party app download for iOS where iPhone users can download tweaked apps and games without jailbreaking their iOS device.

How to Download Apps from ZodHelper on the iPhone?

ZodHelper is an app that lets users download tweaked apps hassle-free. These tweaked apps are created to have features that aren’t available in the original apps, such as being able to download videos, using an ad blocker, and more.

Here’s how you can install tweaked apps from Zodhelper on your iOS device.

I did this process for the trial to check whether Zodhelper is safe and real.

1. Firstly, I visited its home page that comes at the top of the Google search results.

3. After hitting the “Start Installation” button, the actual process starts.

5. However, after a few seconds, it said “Missing Files” and asked me to download two free applications. This sounded fishy to me, so I decided not to download the free apps and complete the offers of a survey.

Should You Install Hacked Apps from Zodhelper?

I have tested the webapp on my iPhone and I guess it is just a gimmick of the developers to lure users by offering hundreds of free tweaked iOS applications without jailbreak.

Indeed, they want us to install free apps and complete surveys or offers in order to get the tweaked apps.

I didn’t fulfill these requirements due to privacy and security concerns. So, I won’t recommend ConsideringApple readers download and install hacked apps from Zodhelper.

There are lots of iOS third-party app downloaders, but none of them are safe. Most of them make money through advertisements, so be prepared for a barrage of advertisements if you download such ++ tweaked iOS apps.

It is better to stay away from such apps and never provide credentials or personal information on these hacked apps.