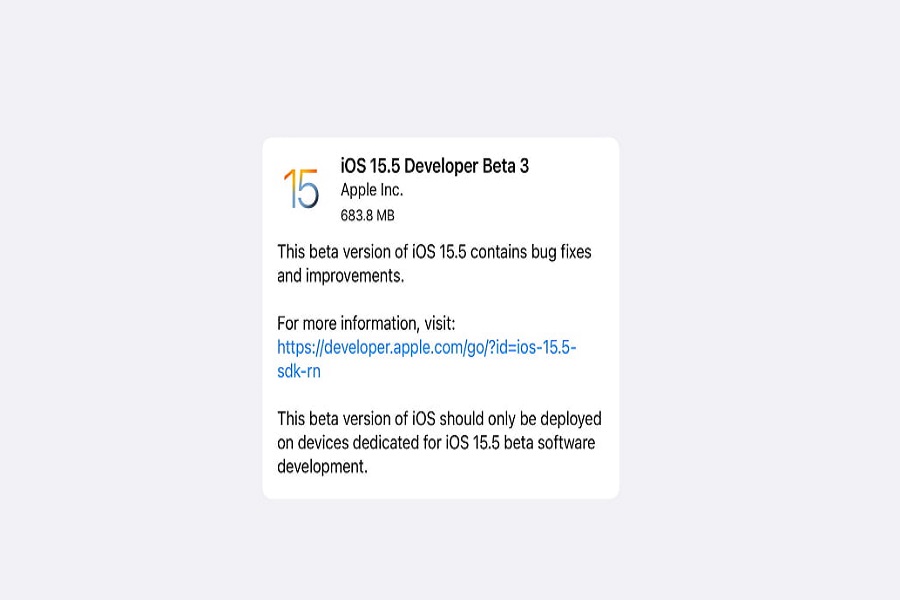 iOS 15.5 follows the iOS 15.4 release, which included support for Face ID while wearing a mask, new emoji, Universal Control support for iPad and Mac, and much more. iOS 15.5 may possibly be the final big upgrade to iOS 15, with Apple set to introduce iOS 16 at WWDC in June.

Apple is currently releasing iOS 15.5 beta 3 to developers, one week after the release of the second beta. Small under-the-hood improvements, as well as upgrades to the Wallet app, Apple Cash, HomePod, and the App Store, are included in iOS 15.5.

The new iOS 15.5 beta 3 version is now available to developers via an over-the-air upgrade in the Settings app. As always, if the update does not display for download right away, keep checking because it might take a few minutes to reach all registered developers. iOS 15.5 beta 1’s build number is 19F5062g. iOS 15.5 might be the final significant upgrade to iOS 15.

Apple releases upgrades to iOS, iPadOS, watchOS, tvOS, and macOS via closed developer previews or public betas on a regular basis. While betas have new features, they also contain pre-release problems that may hinder regular usage of your iPhone, iPad, Apple Watch, Apple TV, or Mac, and they are not designed for daily use on a primary device. As a result, we strongly advise against utilising developer previews unless you require them for software development, and to use public betas with care. If you rely on your gadgets, you should wait for the final release.

Other than resolving existing problems and enhancing system stability, there are no major changes in iOS 15.5 beta 3. That makes sense given that the company is working on iOS 16, and upgrades with the promised features have already been issued in iOS 15.

A lot of the changes in this beta version is back end in the code. Let us list some of the possibly humoured changes that are in talk with iOS 15.5 Beta 3.

Apple has published the third beta of iOS 15.5 for developers to test. Make sure you have an Apple developer account — without one, you won’t be able to download any non-Xcode betas. You may install the iOS beta on your iPhone by connecting it to iTunes, but you must first run the Xcode beta. If you’re already a beta tester, don’t reject the update — in least, it shouldn’t harm your iPhone. Here’s how to get iOS 15.5 beta 3 installed.

When your iPhone reboots, it will be running the most recent beta of iOS. However, there will be some setup required because the system will have changed enough that it will require your login to complete the upgrade.

We should warn you that you must build a backup before downloading the iOS 15.5 beta. If something goes wrong during the procedure, you may always revert to a prior stable version of iOS and get your iPhone running again.

If you notice any other changes or updates coming along with iOS 15.5 Beta 3 version, do let us know in the comment section.