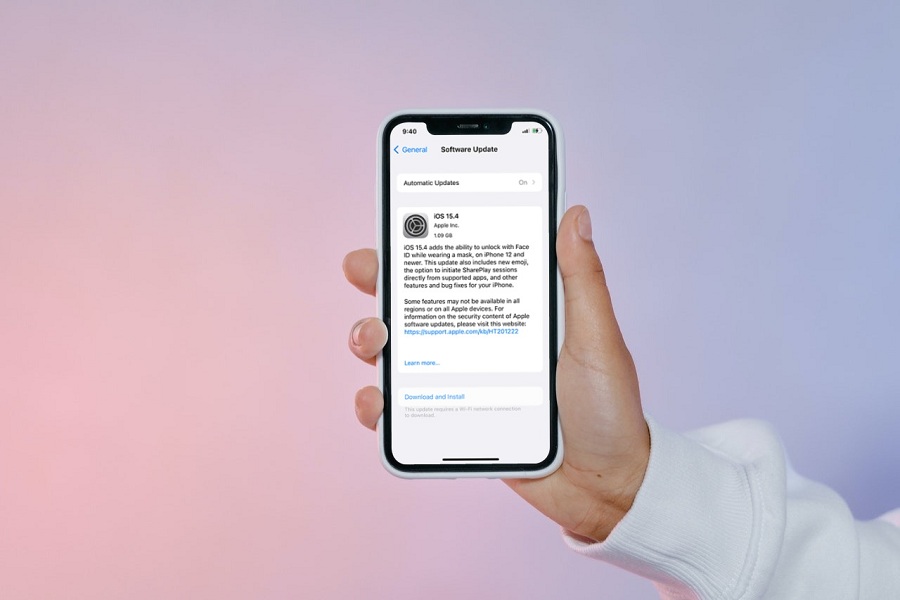 Hola folks! I hope you have heard about the new software update iOS 15.4. This is said to be the fourth major update in the series of iOS 15 software update. For all the iPhone lovers out there, Christmas has come early bearing gifts for you in the form of iOS 15.4 software update.

Apple’s long-awaited iOS 15.4 is finally here and is now available on your Apple devices, just days after the new iPhone SE 3 (5G) was released. Face ID with mask, a gender-neutral Siri voice option, AirTag anti-stalking warnings, live integration with Notes and Reminders, and the long-awaited release of Universal Control are all included in the newest iPhone OS update 15.4. Isn’t that exciting!!

For those who are yet to update their software, worry not. Here are the steps to install latest version if iOS.

Pro tip: As the 15.4 update is way more than a gigabit in size, make sure that you are connected to Wi-Fi to prevent exceeding your monthly data limit.

Let us have a quick preview on all the new features in iOS 15.4.

Face ID with your mask on!

iPhone might be a little late on giving us this update where we can unlock our phone even when our mask is on. Anyway, it is finally here. This might not be the most secure option but it’s what we got. It also works with glasses but not with sunglasses. There is a catch! This update will only be available for iPhone 12 and iPhone 13 models. It won’t be available for iPhone 11.

Have fun playing with emojis, because this time you are getting more than you have asked for. You will be getting 37 new emojis and 75 new skin tone. That makes a total of 112 new characters.

There’s a new “Notify When Run” option for Personal Automations set up in the Shortcuts app that allows you turn alerts for Shortcuts that are enabled on or off. This option allows you to select whether or not to be alerted when a Shortcut is activated, which was not allowed in prior versions of iOS 15.

You can check your current balance and daily spending history with the Apple Card widget, which you can add to your home screen or the Today view.

Password entries in Keychain can be accompanied by notes. It’s as simple as tapping on Passwords in Settings to enter your Keychain entries. iCloud Keychain may be found in the Settings app under “Passwords” on iPhone and iPad.

You may now pick “Still Frame” or “Poster Art” for the Up Next Display in the app under the TV section of the Settings app under “Preferences.”

Vaccination records in the EU Digital COVID Certificate format may now be added to the Health and Wallet applications, allowing EU residents to save their immunisation cards in the Wallet app for quick access.

The iOS 14 introduces a new American Siri Voice that may be used in all interaction. According to Apple, the new Siri Voice isn’t explicitly masculine or female and was recorded by the members of the LGBTQ+ community.

It includes more clearer identification of devices, so you shouldn’t get any unknown accessory alerts. It is intended to be detected by the victims and enable law authorities to seek identifying information about the owner.

It allows us to utilise other devices as second displays smoothly, transferring content across them with only one device. This update will allow users to connect an iPad to a Mac and use a single mouse and keyboard across both devices that are signed into your iCloud account.

The function isn’t available on all devices. According to Apple, Universal Control is available on the following devices:

This release also includes a number of bug patches, which are detailed below.

Have you downloaded this update yet. Let me know in the comment section. And also, don’t forget to tell us which update among these is your favourite.

Best NDS Emulators for iOS
What Are New Emojis In iOS 15.4?
Comment