Home » How Many Emojis on Apple? Why Is It Trending? 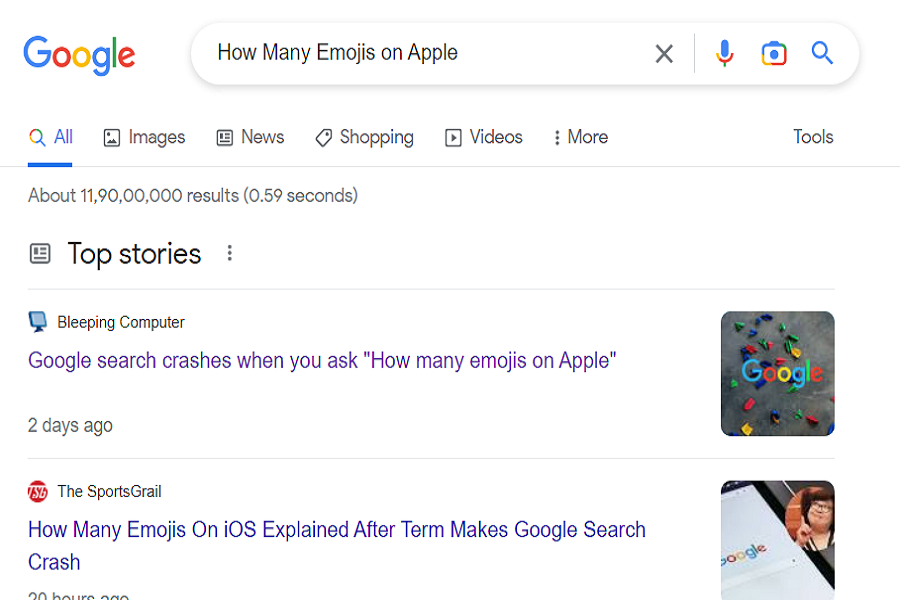 Looking into the concerns, Bleeping Computer was the first one who identified the problem and was able to reproduce the particular issue on both Google search sites and the mobile app available.

When users entered these particular keyboards, a lot of server errors popped up that prevented optimal functioning or prevented the users from getting access to the relevant information regarding the terms they entered.

Termed the “freeze emoji”, the users found that entering the mentioned phrase brought along a lot of server errors.

The server error message says, “We’re sorry but it appears that there has been an internal server error while processing your request. Our engineers have been notified and are working to resolve the issue. Please try again later.”

While most users thought that the issue was likely country-specific, the same wasn’t found to be the case. It was initially reported on google.co.nz.

But, a series of events following confirmed that the error wasn’t a country-specific error only and was affecting Google on a global scale, meaning that google.com was also showing the same error message.

Following the issue, user llui85 compiled a list of triggering issues that led to the server errors that were visible on Google. Some of them include:

Since the initial server complication and error, things are fixed now, which means that users won’t have to experience the same issue any more. Users believe that a specific web page appearing in the search results was causing the error. However, there are no official reports or confirmation from Google as to why it was happening.

Given that the situation was so absurd and out of the blue, it isn’t surprising that the same quickly became a trend on varying social media platforms, especially on Twitter.

Reports also suggest that Bleeping Computer has already reached out to Google and is currently waiting to hear back from them regarding the issue and what could be the potential cause behind the problem. They are yet to hear back from Google.

TagsHow Many Emojis on Apple

How To Water Eject on iPhone Using Siri Shortcut In iOS 15 & iOS 16
How to fix Siri something went wrong iOS 16 issue?
Comment