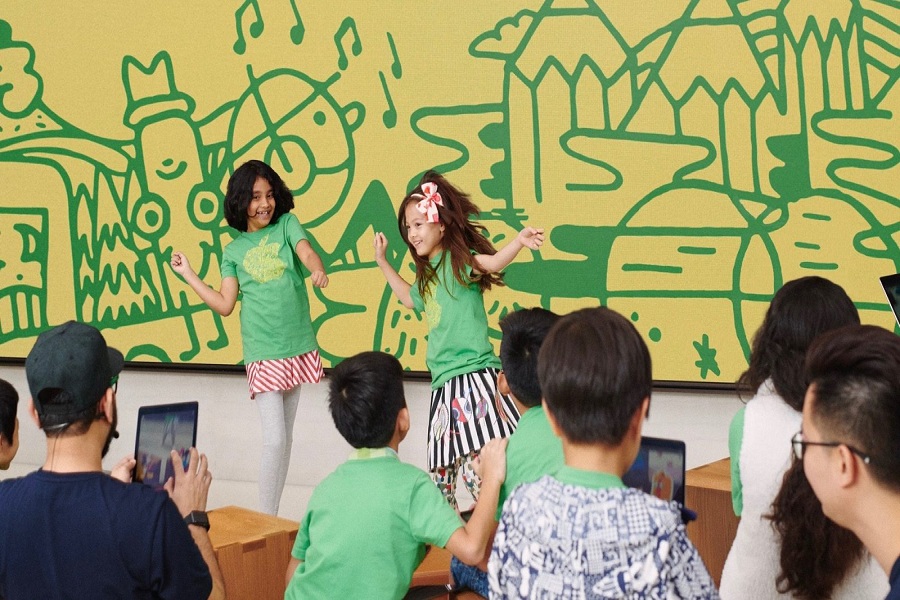 2019 Apple Camp registration for kids this summer is open now. This year’s Apple Camp is scheduled from July 7th to August 3rd in the US, Canada, Mexico, Germany, South Korea, Japan, Spain, Australia, Sweden, UAE, and other major countries of the world. In the United Kingdom, China, Taiwan, and Austria, the registration will begin from June 24th.

In Apple Camp, Kids between the ages of 8 to 12 are given different kinds of sessions and the opportunity to explore at the Apple Stores. The program is an extension of Today at Apple, providing an outlet for creativity and the opportunity to learn new skills like coding, music, moviemaking, art, and design. Kids are given sessions on coding, music, moviemaking, or art and design by participating in various free 90-minute hands-on sessions at the store. Apple said all the participant kids must be accompanied by a parent or legal guardian while attending these sessions.

The Apple Camp has been named Apple Summer Camp in Singapore and programs at Singapore can really give us quick sneak peek about what Apple has in mind for other countries also. Here’re the sessions according to its webpage that will be given to kids this year’s camp, take a look:

Creating Your Own Song with GarageBand

In this three-day session, kids aged 8–12 explore how to build their own song. They’ll learn rhythm basics, practise making beats and experiment with Smart Instruments to create a melody in GarageBand for iPad. On the final day, Campers will celebrate their new skills by sharing their song with the group. Devices will be provided.

Designing Your Dream Park with iPad

In this three-day session, kids aged 8–12 learn design skills to imagine a park for their community. They’ll go on a short walk to gather inspiration and take photos of materials, colours and textures. Then they’ll sketch their ideas in the Procreate app using iPad with Apple Pencil to bring their design to life. On the final day, they’ll present their park to the group. Devices will be provided.

In this three-day session, kids aged 8–12 explore fun activities to learn how to code Sphero robots. They’ll start with coding fundamentals like commands, loops and functions, then use blocks of code to create a program using the Sphero Edu app for iPad. On the final day, Campers will program lights, sounds and animations to tell their own story starring Sphero. Devices will be provided.

Directing Your Own Movie with Clips and iMovie

In this three-day session, kids aged 8–12 discover how to create fun video footage using iPad. They’ll start with fundamentals of moviemaking like experimenting with camera shots in the Clips app and drawing ideas on storyboards in Keynote. On the final day, they’ll apply their skills to make a captivating movie trailer using iMovie, and they’ll celebrate their creations. Devices will be provided.

So if you have kids or you a kid then you can register for the program as soon as possible as space is limited. Last years’ camp, Kids were given free t-shirt who have attended Apple Camp.