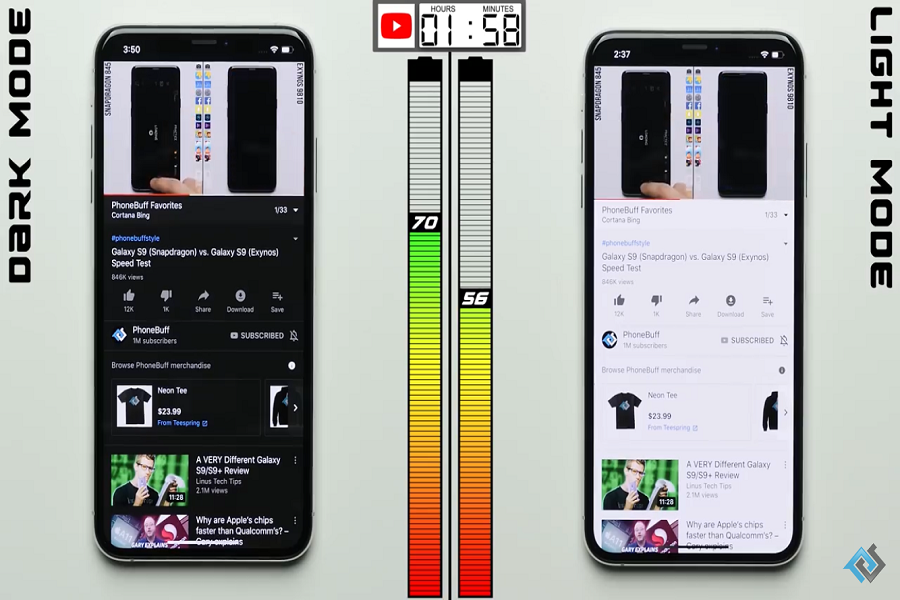 iOS 13 was revealed on June 3, 2019, at Apple’s WWDC and one of the most headlining features of the iOS 13 is Dark Mode. After the release of iOS 13 developer beta and then public beta in June, people have found and teste the dark mode beneficial for various things including soothing for eyes, battery saver, and various other things. At one point, Apple also promoted the new dark mode feature as a battery saver. After the official launch of the latest iOS update on September 20, a recent experiment shows that Dark Mode could really be helpful in saving the battery life of the iPhone. This experiment claims that by enabling dark mode on your iOS device, you could really extend the battery life of your iPhone.
A YouTube channel named PhoneBuff has released a video that shows how dark mode on your iPhone is very beneficial for battery life than the light mode. This YouTuber engaged two robotic arms to access two iPhone XS, where one with the light mode on and another enabled with dark mode. The various function of the iPhone including Google Maps, Messages, watching videos on YouTube, and various others. The next morning the iPhone with the light mode on was dead and iPhone XS with dark mode had 30% battery left. So this clearly shows that the dark mode of iOS 13 is very helpful in extending your iPhone’s battery life.

A significant point to be noted here is that the test is really dependent on the brightness and the type of screen you are using. This test was done with displays set to 200 nits brightness so you can see the lighter and darker brightness settings but in the end, the winner is dark mode.
Another very important thing is dark mode is even more beneficial for iPhones with OLED display. The iPhones that have OLED include iPhone X, XS, iPhone 11Pro, and iPhone XS Max. But iPhone 11 and iPhone XR among the latest devices don’t possess OLED displays. The OLED display has better contrast as they are completely black or turn off when they are meant to be dark and this characteristic of OLED display works best to save the battery when dark mode is enabled.
This study is completely based on iPhones with OLED displays so there are some chances that iPhone with LCDs including iPhone 7 Plus, iPhone 8 Plus, iPhone XR, and iPhone 11 may show some different results on the battery life when using dark mode. LCDs are not considered to be as efficient as OLED. But one thing for sure that dark mode could also help to extend the battery life of the iPhone even with an LCD.
So you should switch to dark mode if you have a compatible iPhone for iOS 13. Some websites and third-party apps like YouTube, Instagram have also adopted a dark theme. So if you are using such apps more maximum time on your device and your iPhone is dead after a few hours then you should try dark mode immediately.
Tagsdark mode iPhone