Home » When did the first iPhone come out? 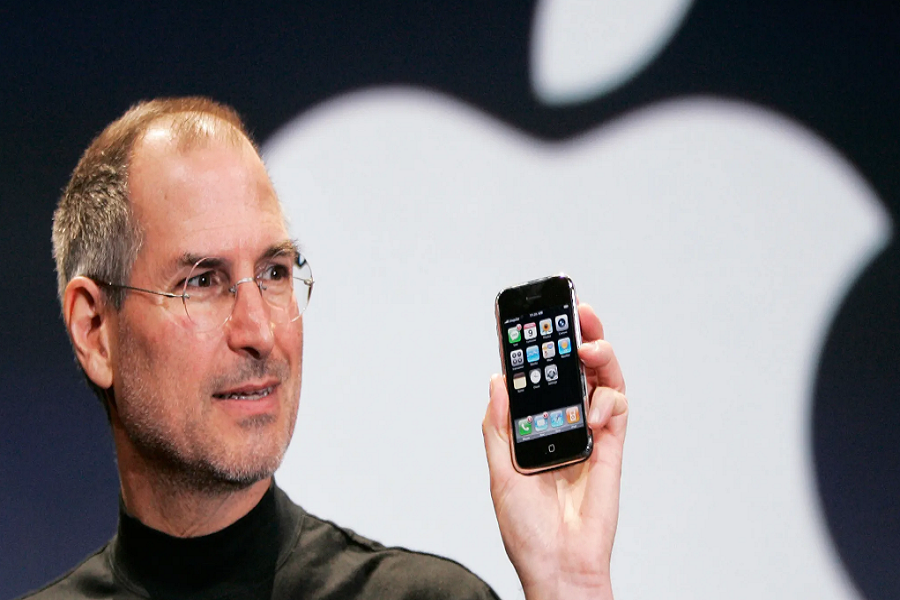 Every now and again, a breakthrough product emerges that alters everything. Today we are going to talk about a significant milestone in Apple’s iPhone timeline.

Beyonce topped the charts, Night at the Museum was #1, Britney’s breakdown, as for the technology people used blackberries and flip phones, and on January 9, 2007, Apple debuted the first iPhone, which transformed the world. 2007 was indeed a good year.

Apple had planned to revolutionized the phone industry. It was considered a breakthrough in terms of modern smartphones. It was a transformation for the rest of the world by getting everything you want at just a click in the palm of your hands. I think we could all equally agree that the first iPhone was a game changer. Although let me tell you one thing, when the first iPhone came out, the Apple company wasn’t sure if this was going to work, or will they suffer a great deal of loss, as there was a minimal share in the market of this device. They weren’t even sure if this new iPhone era was going to work among the people or not. But look at it now. They were so wrong about it.

It was considered a bee changer because it was the first touchscreen you won’t believe that the iPhone sold over 2 billion units. That’s quite a number, I must say!

Was iPhone the first touchscreen phone?

It is believed that the LG Prada was the first mobile phone with a capacitive touchscreen, although you may not remember it, how can we remember, iPhone definitely stole all the thunder.

When did the first iPhone come out?

The first ever iPhone to be introduced was on 9th January 2007 at Macworld Expo in San Francisco.

In its initial year iPhone sold around 6 million pieces.

Who owned the first iPhone?

We cannot possible tell who owned the first iPhone but during an interview for the podcast ‘Million Dollaz Worth of Game,’ Soulja Boy said that he received the iPhone during a music video Crank That shoot in 2007, making him the first rapper to do so. His words not mine.

Let us dig a little deeper in this topic, shall we. We may now see the history of when did it all began and what features did it all have that started the rise of the iPhone.

When the first iPhone was launched it came with a catchy tagline: “Apple reinvents the phone.” and let us be honest, they surely came through with it, by reinventing it to greatest iPhone.

It was first announced on January 9th 2007 by Steve Jobs who was the CEO of Apple, at Macworld Expo in San Francisco. But it was released months after that. On 29th June 2007 the first ever touchscreen iPhone was released. Sadly, it was discontinued on July 15th 2008, in just a year.

It had 3.5- inch screen, which was considered a big screen compared to other phones. 2- megapixel camera and 320*480 pixel at 163 ppi. It has 4GB and 8GB storage capacity. Can you believe all the data being stored in just 4GB iPhone. And it also included camera. Which was such a big deal at that time. A phone with a camera? Damm, Apple was up to something here.

Over 6 million of these we sold out to public. It was release with its own operating system called iPhone OS 1.0. the last software update that the first iPhone received was iPhone OS 3.1.3.

The price of the first iPhone started from 499$ for 4GB and 599$ for 8GB. Apple also offered a 2- year contract for these prices. With 499$ also in 2007 it was considered very expensive, and everyone was in doubts whether this much expensive phone would work or not, will people buy it or not. But look at the prices of iPhone now, the starting prices are from 799$. But people did complain about the prices, as they found that it was way too expensive. Apple took that into consideration and later on 5th February 2008, they released a 16GB model for just 499$, same rate as 4GB model.

This first ever iPhone was considered a beautiful breakthrough despite its flaws it made a balance.

“The iPhone you have been waiting for.”

iPhone 3G was the successor of the first iPhone. This iPhone included some new features which included GPS and 3G data, it also allowed used to download third party applications. It was launched on 9th June 2008, and released on 11th July 2008. This time Apple lowered the prices by giving 8GB model for 199$ and 16GB for 299$. It had 2.0 megapixel camera, 3.5 inch display screen and 128 MB memory. And in just its first weekend of release over 1 million iPhones were sold.

“The fastest, most powerful iPhone yet.”

“This changes everything, Again.”

It was announced on 7th June 2010 and released on 24thJune 2010. This iPhone included facetime, retina display, front camera and gyroscope. Who would have thought at the time that front camera for selfie would take on the world now. It has 5- megapixel camera and 512 MB of memory. 16GB model was sold for 199$ and 32 GB was sold for 299$.

“The most amazing iPhone yet.”

iPhone 4 This was launched on October 4th, 2011 and was released on 14th October 2011. Some key features of this phones where it had new dual core processor. It was similar to that which was used in iPad 2. The rise of Siri began with iPhone 4S. Other features were that video could now be recorded in 1080p. The camera also went from 5 mega Pixel to 8 Mega Pixel. Its 16GP model was priced at $199, 32GB model was priced at $299, This time 64GB model was also released which was priced at $399.

“The biggest thing to happen to iPhone since iPhone.”

This phone was launched on September 12th, 2012 and was released on 21st September 2012. This was the first iPhone to have a four- inch screen. The memory was boosted to 1TB. But the camera stayed the same. It had LTE connectivity. And also lightning corrector was introduced. The price of 16 Gb was $199, But the two TV model was priced at $299 and 64GB was $399.

“You are more powerful than you think.”

This iPhone was released on 20th September 2013. Although it was same as Apple iPhone 5. It includes many new features. Touch ID, dual flash, motion co- possessor, slow motion video was launched. iPhone 5C was considered as a reskinned iPhone 5 version. iPhone 5C was priced at $99 for 16GB model. Whereas 5S was priced at $199 for 16GB.

iPhone 6 was launched on 9 September 2014 and was released On September 12th, 2014, along with iPhone 6 Plus. This iPhone had the feature of Retina HD display, and optical image stabilisation for iPhone 6 plus. iPhone 6 had 4.7 inches screen whereas iPhone 6 Plus had 5.5 inch screen. They both had touch ID security. The users also got 12 Mega pixel camera. Apple also included a new feature called Apple Pay.

This phone was released on 31st march 2016.  The intention to release this phone was so that people could afford it by making it more reasonable. It is just a mixture of iPhone 5S and iPhone 6, It had a screen of iPhone 5 and the processor of iPhone 6S, but without 3D touch.

By the launch of this phone on 16th September 2016 Apple dropped the support of 16GB storage capacity. Now the storage went up to 256 GB. Apple has started releasing some many amazing new features which included improved zoom feature, Portrait mode, improved camera quality. It also has A10 fusion quad core processor. Sadly, with this phone, Apple had removed the headphone jack, you needed to plug your EarPods into the lightning port. Apple also introduced wireless Air Pods with this launch.

This model was released on 22nd September 2017. With the release of iPhone 8 and 8 plus Apple introduced wireless charging with the glass Power on the back of the iPhone. The camera quality kept on increasing. We even got new editing tools to philtre our images. True Tone display was introduced. We got a 11 bionic chip. Now the price kept on increasing the starting price of iPhone 8 was $699.

The iPhone X series was released between November 2017 and October 2018. The price range of this series started from $999 for 64GB and $1149 for 256GB. With this iPhone series, Apple removed the Touch ID and home button, instead we were given face ID, the new biometric system security. This series had front facing cameras for portrait selfie mode. With A12bionic chip it increased the processing power while decreasing battery drain problem.

The iPhone 11 series model were released in September 2019. iPhone 11 had 6.1 -inch liquid retina display. 12 mega pixel camera. And it also offered wide and ultra- wide lenses. It was said that this was the least expensive phone of Apple considering the price we are having now.  iPhone 11 Pro was nearly perfect with 5.8 inch Screen, having super Retina XTR display, 12 mega pixel camera and also telephoto lenses with ultra wide. iPhone 11 has 6.5 inch display.

iPhone S 2nd generation was released on April 24th, 2020. It has 4.7 inch Retina HD display and home button which touch ID Which might remind you of the original iPhone SE. iPhone SE also offers same advanced feature as other expensive iPhones. It also includes a 13 bionic chip camera with portrait mode and depth control, has wireless charging capability and long battery life.

iPhone 13 series lineup was released on September 24th, 2021. The iPhone series included iPhone 13, iPhone 13 mini, iPhone 13 Pro and iPhone 13 Pro Max. With the release of iPhone 13 series every design features were reintroduced that we got an iPhone 12 series. This series had A15 bionic chip, and we had more improved camera quality. Storage capacity also increaded from 256 GB to 512GB. The display size of iphone 13 mini was 5.4 inches. Iphone 13 pro has 6.1 inches display with pro motion, it also offeres is 1TB model for more storage. The proce startinng fpr iphone 13 series is 699$ and may go up to 1099$.

TagsWhen did the first iPhone come out?