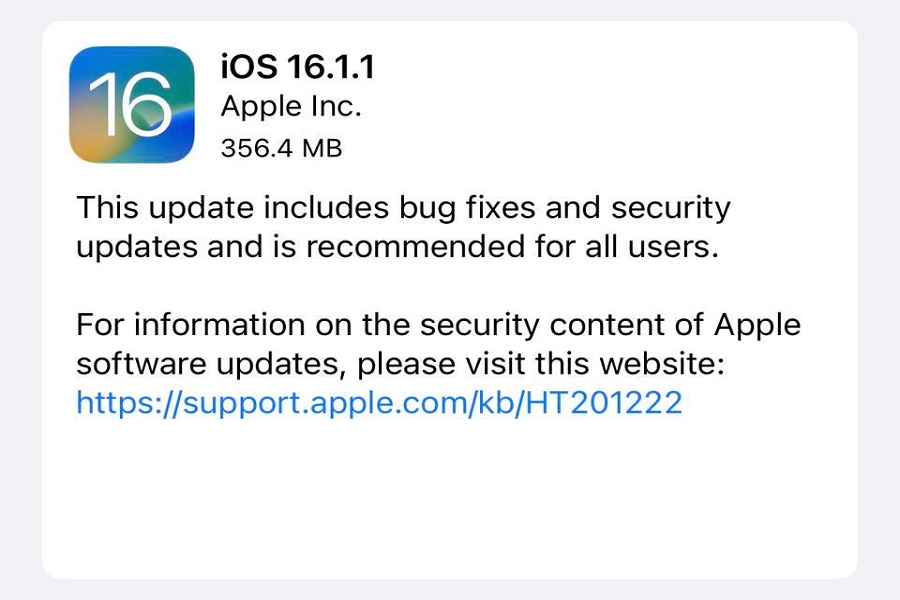 Apple has launched its current 2 important updates, that is iOS 16.1.1 stable version and iOS 16.2 beta 2 versions to the public. These are two big updates not in terms of size but in terms of fixes and improvements. Since there were many bugs in iOS 16.1, Apple had a lot of pressure upon it to resolve those issues with the next update of iOS 16.1.1.

IOS 16.1.1 is not a very big update, it is just around 277 megabytes on iPhone 12 Pro, the size of this update might differ based on the iPhone model you are using. If your iPhone is running an older version of iOS, your iOS 16.1.1 upgrade will be larger since it contains the changes from previous iOS releases that you ignored.

Apple has put forward the release notes of iOS 16.1.1 which basically list out all the security patches that iOS 16.1.1 has to offer. In these security patches, Apple mentions two major security flaws in libxml2, identified as CVE-2022-40303 and CVE-2022-40304, which might allow an attacker to remotely execute code. None of the flaws addressed in iOS 16.1.1 have been utilized in real-world attacks, but we gotta be careful though.

The users might be a little disappointed after installing iOS 16.1.1, as it might have said that it fixes all the issues that were there in iOS 16.1 but the battery problem and Wi-Fi connectivity issues still continue. It did say that Wi-Fi connectivity issue has been solved in iOS 16.1.1, but there are still many users who claim that this issue on their phone is not yet solved even after installing iOS 16.1.1.

Talking about the performance of the application after the update, all the third party application are working just fine, the performance has been boost up more than expected. Battery list according to some is currently stable, but there is still a debate going on between the users as some are still facing battery drain problems. Comparing iOS 16.1 to iOS 16.1.1, both work with the same speed but with a little boost up performance.

If you are still confused about whether or not to upgrade your compatible device to iOS 16.1.1, then I think you should go for it, since there are many important security patches that Apple has given this time, which is for our benefit and to protect our privacy and security. So if you want to look form the point of view of security then iOS 16.1.1 is your guy. If you are planning on getting more stability and bug fixes especially for Wi-Fi connectivity, then I would suggest you wait for iOS 16.2 since it is already in beta trials and Apple is really working hard on solving the bugs that currently all its users are facing. Ultimately the choice is always yours.

Let us know in the comment your thoughts regarding iOS 16.1.1 and whether you think you should upgrade your device to iOS 16.1.1 or wait for iOS 16.2.

How To Apply for Elon Musk’s Twitter Blue Tick from iPhone?
Is there an iOS emulator for PC?
Comment