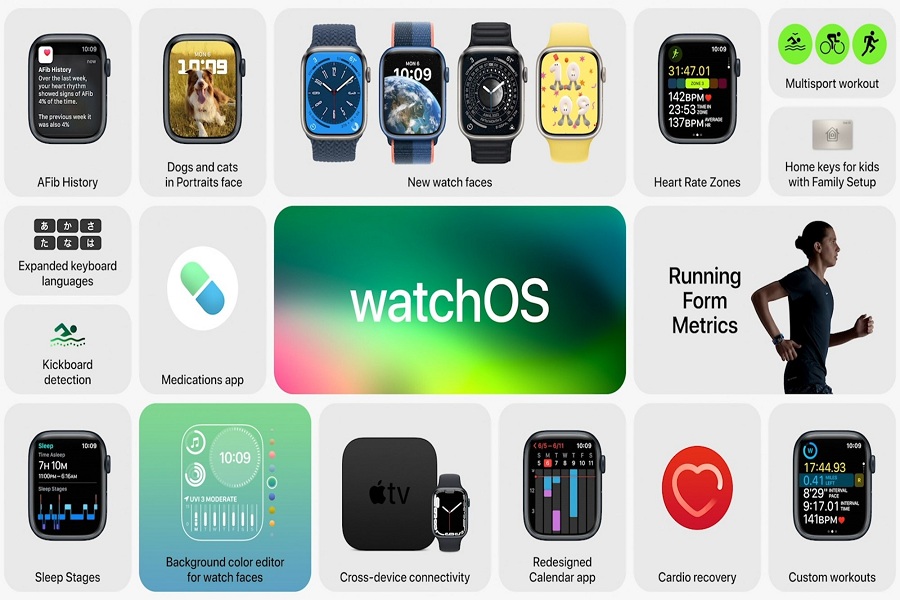 This latest version of its smartwatch OS is said to include new fitness features, including medication reminders and running metrics.

The initial version of watchOS 9 will be available for developers, while the public beta version will be launched next month. The final release of watchOS 9 will happen during fall 2022 when the new Apple Watch Series 8 is launched.

Like always, watchOS 9 will introduce new watch faces. This time, it will have a lunar face, an astronomy face, and a playtime face. It will also include a typeface screen called Metropolitan.

The new SIRI interface will enhance the smartwatch experience. Users will have the option to personalize their watch faces, like changing the background color in watch faces.

Apple has also included a special feature for triathletes. It will allow them to switch between running, swimming, and cycling. The kickboard detection will enable the watch to track swims. It is also packed with a SWOLF score that will measure stroke efficiency.

The digital crown option allows you to switch between different workout views. Not just that, but you can also create your custom workouts for a more intense session.

Fitness Plus updates will allow you to see on-screen instructions for certain metrics like cycling, treadmill, HIIT, and rowing. Users who don’t have an Apple TV can now view their metrics on-screen by using AirPlay streaming.

The watchOS 9 comes with medication reminders, which are associated with the Health app. This will allow you to create your medication list and schedules. This feature can also be used to find out if the drugs you are taking will interact with each other. However, this feature is currently limited to US users only. You can also review the health data before sharing it with others.

According to Apple, watchOS 9 will support Series 4 or later. This means Series 3 will be dropped from the support list. There are rumors that the tech giant will drop three new Watch models later this year.