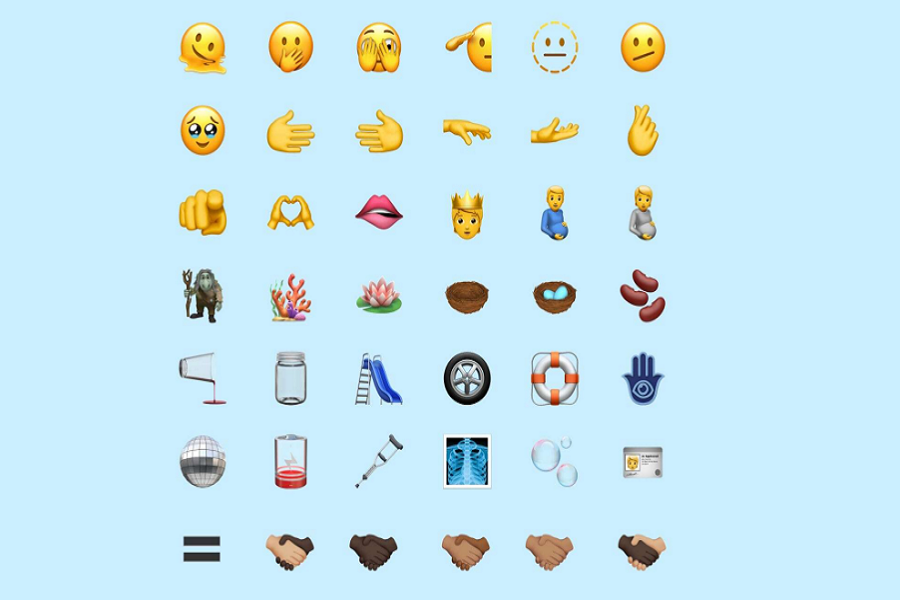 Emojis are the best way to express your emotions and feelings while texting to your near and dear ones. Sometimes, you cannot say what you want to and at that moment, these emojis bring your heart out.

Apple understands the value of emojis and thus keeps on adding new ones to the collection frequently. Looking forward to using interesting emojis on your iPhone? Continue scrolling the page and find out what new options iOS will release in 2022 to entice the users. Let’s get into it!!

Here’s the complete list of new and exciting emojis that are expected to release in 2022 for iOS. Keep scrolling to see what Apple has in store for you.

It’s fantastic and helps capture so much. The lips are relaxed, not frightened, and the idea that both eyes may peep indicates that things are unexpected but not unwatchable. All and all, it’s expressing and worth adding to your emojis collection.  That is your emoji for when you don’t want to stare but can’t help yourself.

It also conveys a sense of surprise. However, the eyes aren’t particularly dynamic, restricted to Smiley’s eyes. It could even be as simple as covering your mouth with your palm when you sneeze. This emoji is more likely to say “I’m shocked” or “Did I just say that?”

Please take note of the hand’s position. That is an advantage when a British soldier would flip the flat of their hand forward at one time or another. And the hand took up so much room that only half of the face is visible.

It is another novelty, and it works both literally and symbolically to convey a blazing temperature, as well as a sense of embarrassment, say – “I could have melted into the floor.”

Crying is the result of a variety of emotions. That is a flexible alternative, but take note of the laughing mouth. “I’m so pleased,” “I admire you,” and “I’m appreciative” are just a few of the responses that come to mind.

It’s fantastic that the current emoji update has so many new Smiley expressions, and Apple, as usual, has developed them with attention and added pleasure and creativity to the mixture. So you can send more crucial, or at least more amusing, messages.

There are seven new motions released by Apple, but when you factor in the skin color adjusters, the total number of emojis increases dramatically. Hands going right and left, as if saying “following you,” get accompanied by hands facing downward and upward.

Then there’s the linked index and thumb, which indicates a love but also, of course, something financial, such as “Can you return me what you owe me?”

Then there’s one that is pointing a finger at you to say, “Your Nation Needs You.” Eventually, the love motion is now available as an emoji in skin tones.

These are, after all, always helpful. There are five different skin tones accessible, and by the time iOS 15.4 gets released to the public, all hand colors will be moving. Currently, only the five skin tones shaking the same color are accessible in the first dev beta, but this will alter.

What about a pregnant man wearing a crown or a non-gender specific individual? They’ve finally come. A pair of luscious lips with teeth pinching the bottom lip gets also seen. Coral, a pink lotus flower in bloom, an empty clutch, and the corresponding nest with eggs are my faves.

There’s also a disco glitter ball, which is ideal for sending party-related messages. Honestly, how did we get along without it?

Best of all, there’s a demon with a stick. Since the announcement in the spring, the troll has surrounded themselves with personnel, and the skin tone has faded from green to a more subtle grey.

All emojis will be included in iOS 15.4 which is expected to release in March. You can join up for the public beta, which just launched, before then.

How to update new Emojis on iPhone?

Curious to use these new emojis on your iPhone? Here’s the quick rundown of the step-by-step procedure to update them on your Apple-based phone.

There are a lot of smileys in this edition. When all of the varying skin tones and other aspects get taken into account, the total number of new emojis is over 800. Update your iPhone right away and express what you are feeling with the help of these exciting emojis.

For more updates stay connected with us.

When will Apex Legends Mobile iOS be released in the USA?
How To Watch Apple March 8 Event 2022: Time & Live Stream Link
Comment