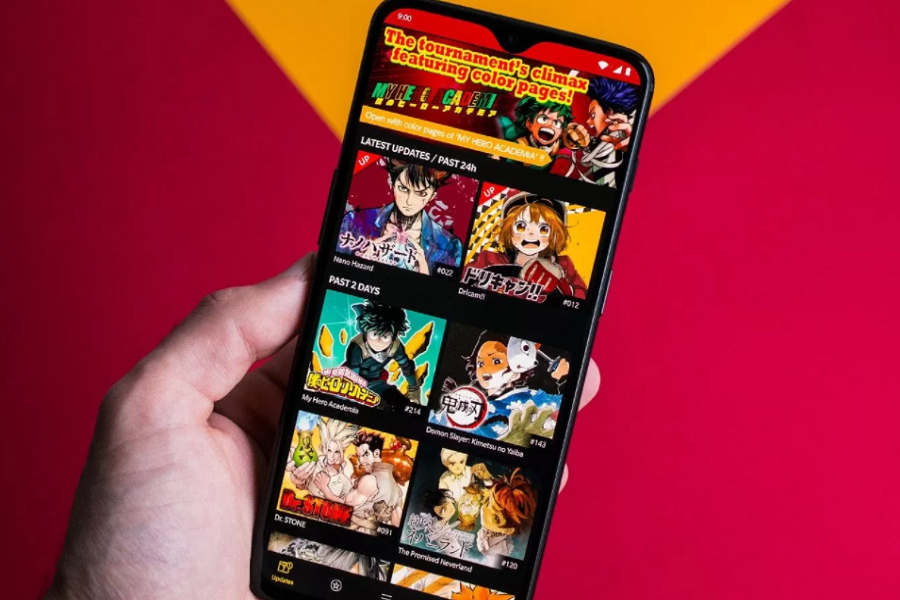 Comics are part of every kid’s childhood. But, while most of us grew up reading the physical version of the manga, not everyone has access to it today’s date. Hence, the next best thing is to read the digital version of manga on the various apps that are available for iOS devices.

Since the manga is so popular, it isn’t surprising that the availability of the best manga app for iOS isn’t that difficult to chase. You can comfortably find some of the best apps on the internet that offer a diverse range of manga comics.

This article will explore some of the best manga apps for iOS that are worth the time and almost all of them are free to explore.

Amidst all the amazing manga apps for iOS, one that deserves a mention at the top is VIZ Manga. Not only is the app mainstream, but it also provides you with easy access to some of the most popular manga comics without any hassle.

From the hit comics like Dragon Ball Super to My Hero Academia, you can more or less find every genre of manga and anime comic that you feel like reading at the moment.

What makes this app such a hit among users is its accessibility. You get access to an updated library of manga comics every few days to a week, which is always a benefit on its own.

Every anime lover knows how popular Crunchyroll is in the anime world. However, what makes this app so widespread and popular is the availability of a separate app for manga comics. Their official manga app consists of a variety of amazing genres and categories of manga that you can binge-read.

Not only on iOS, the app is also available on Android, allowing you to enjoy manga from anywhere you deem suitable. Furthermore, they also keep updating their library of manga comics, which is another reason why it has gained the kind of popularity that it has.

If you are particularly a fan of the Shonen Jump series, this manga app is a must-have on your iPhone. The app lets you read 100 chapters of manga for free each day, following which you’d have to pay $1.99 per month to unlock the unlimited benefits. Overall, this app is hands down the best one so far, especially when it comes to credibility.

Since the app is exclusive to the Shonen Jump series, there’s no surprise that you get access to the new chapters first when you download this app. No longer will you have to wait for the chapters to be available elsewhere to read them.

For users looking for a diverse Manga app that they can use for iPhone, iOS, and other platforms, MangaToon is hands down the best one in the lot. It is also one of the few manga apps that run on Macbooks and effortlessly.

Using this app provides you with direct access to all the colorful illustrations and comics of all time. Also, the app has a very clean UI, which contributes to the overall reading experience that you have with the app.

We can’t have a list of the top Manga readers for iOS without mentioning Manga Zone in the list. This one has been around for quite some time now, offering a comprehensive interface and usability. It features all the latest graphic novels that you can potentially think of.

It does come with a free and paid version, both of which are quite fun and accessible. You do have access to all the free filters in this app, which is another reason why it has gained the kind of popularity that it has.

One of the most unique features of this app is the availability of a history panel, which allows you to go back and read the last comic where you left it.

Another comprehensive and highly functional Manga app for iOS that’s worth exploring is Manga Plus. Their service brings you easy access to a variety of amazing manga comics, all of which are highly functional and easy to explore.

What’s great about this app is the content category. You get access to all the most popular manga series and comics you can think of.

Every latest chapter in the comic is updated immediately on the app, so the users won’t have to wait to get access to them. Also, it contains almost all the Shonen Jump titles.

If you are particularly looking for a manga app that enables you to read different genres of manga legally, Mangamo is the best app for iOS. The best thing about the app is not only the fact that the platform is legal but the authors that publish their manga on the app are duly compensated.

As for the collection, you get to browse through different categories of manga, including the pretty OG and popular ones that everyone raves about. However, unlike the other manga apps, we have mentioned until now, this one is a paid venture. This means that it’s subscription-based and costs $4.99 per month.

Also, if you are worried about updates, every manga is updated with new chapters each week so you have something fresh to binge-read.

For manga enthusiasts who are hooked on reading new and updated chapters each week, Manga Dogs is no doubt one of the absolute best options to explore. It is a webtoon reader and includes a collection of all the latest manga comics that you can think of reading.

Besides the collection, the UI and UX of this app deserve special mention. As you are reading the current page in the app, the next page in the chapter is downloaded automatically in the background, providing you with easy access and a scrolling experience.

Also, it comes with a night mode feature, which is perfect for users who have a habit of binge-reading comics and manga late at night. It doesn’t put a strain on your eyes even after prolonged reading.

Manga Storm CBR is a fairly new manga app for iOS. It hasn’t been around for many years but has managed to kick off a dedicated user base in such a short time. If you are looking for a manga app where you can indulge in offline reading, this is an option we’d recommend you look into without fail.

The compatibility is also commendable since the app connects with Drive, OneDrive, Dropbox, etc. if you want to download the comics and read them later.

Although this app doesn’t have a unique or fancy name, it is one of the OG manga readers on iOS. It is a 100% free app, which is pretty great if you don’t want to pay a recurring subscription fee to access the newly updated chapters in the comic.

Besides online reading, the app also supports offline reading, wherein you can download and save a manga in a folder in the app and then read it at your convenience.

Despite being an iOS-exclusive manga app, it comes with a lot of customization options, which is quite convenient, especially if you want to improve your reading experience through and through.

Comixology provides iOS users access to the largest manga collection you can potentially think of. What’s amazing about this platform is its accessibility. You get to work around different categories and genres of manga and new manga and chapters are updated frequently, which means that you’d never be bored.

The app also stores different manga comics from popular publications, so you can have access to them without any hassle at all.

The platform contains over 100,000 manga stories, digital novels, graphic novels, etc. Additionally, the app offers a guided view of the comics, so you can enjoy a comfortable reading experience.

Last but not least is Manga Monster, which is another popular and feature-rich app for iOS. It consists of 24,000+ manga titles from different categories so you always have something unique and exciting to read. Also, the app’s library is continually updated, meaning that you’d have timely access to all the latest chapters at your disposal.

Besides a clean and minimal user interface, the app is quite lightweight and doesn’t cause delays and buffers to the background apps running on the mobile.

Manga apps are not as functional on iOS. However, if you are looking for some of the best and free ones for your iPhone, we have assorted the top ones that we think are worth the time. The only thing you need to ensure is downloading and reading the latest chapters as soon as they are updated.