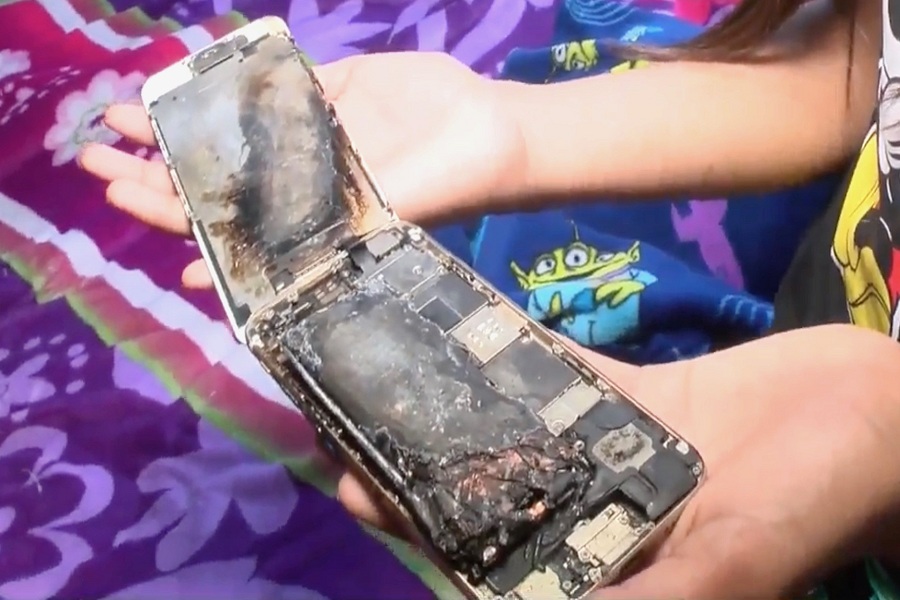 An 11-year-old girl’s iPhone 6 caught fire while in her hands and Apple is investigating as they received the reports.

A girl named Kayla Ramos observed sparks from her iPhone and she threw it on the blanket, resulting in holes in the blanket. In a report by 23ABC, Kayla said: “I was sitting down, and I had my phone in my hand and then I saw sparks flying everywhere and I just threw it on a blanket”. And she added, “I was right here on the bed and the phone managed to burn through this blanket and make these holes.” She said she usually used the device to watch videos on YouTube and sometimes lets her younger siblings play games on her iPhone 6.

Maria Adata, Kayla’s mother called the Apple Support and she was asked to mail photos of exploded iPhone 6 and she was ensured to get a new iPhone from the company. Right now Apple is investing the reports and the factors that could have caused the explosion. The burned iPhone 6 was nearly unrecognizable and its display panel was separated from the body and was partially disassembled due to the explosion.

Apple says there are some factors that may result in an iPhone to overheat and catch fire. According to Apple, using unauthorized products with the device such as third-party charging cables or plug, repairs with unauthorized parts, and sometimes external damage may cause an explosion. In the case of Kayla, none of these factors are applied.

So, the real reason behind the fire in iPhone is yet not identified and Apple is reportedly investing the case thoroughly but it has not commented on this incident publicly yet.

This is not the first case of an iPhone bursting in flames, last year two incidents to the similar case were reported, a man said his two-week-old iPhone XS Max caught fire in his back pocket and in May, a video went viral of iPhone exploding in a store of Las Vegas.

Apple has always said that the users’ safety and privacy are their fundamentals and they will definitely bring the solution from such things to occur in the future. Apart from Apple, Samsung, Oppo, Vivo, and several brands’ phones have reportedly caught fire in the past.

The Best Apple’s iPhone Deals in Amazon Prime Day Sale 2019
Why Are People So Much Crazy About iPhone 2021 Instead Of 2019 Model?
Comment