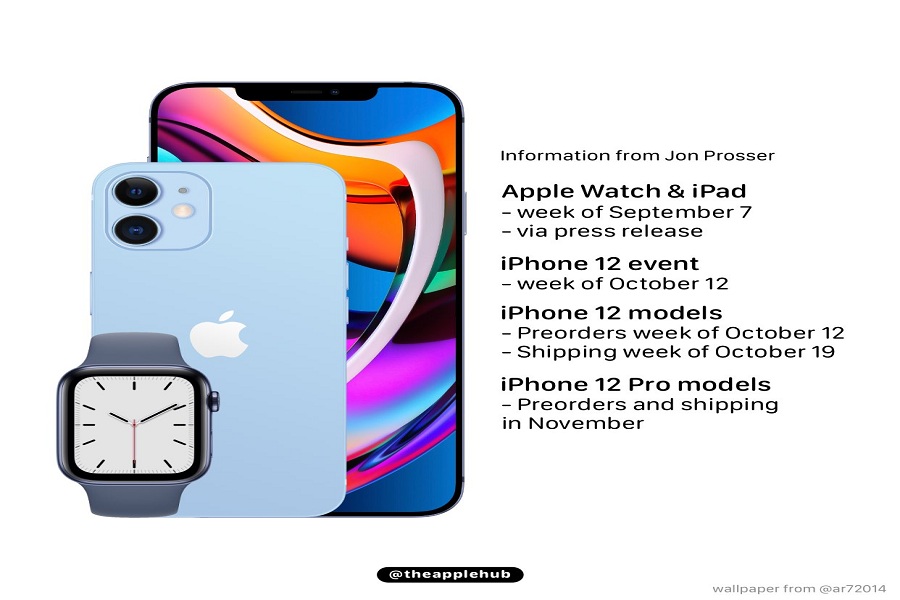 When will iPhone be released? What is the date of Apple’s Special September or October event? Which device expected to come with iPhone 12? Every day, we heard these questions from Apple fans from all over the world as the date of Apple’s next event is coming near. We heard a lot about the upcoming devices and event date. But today, we have something more to share with your guys.

This time, the popular leaker Jon Prosser @jon_prosser shared some exciting about Apple’s next product releases. It means that Jon leaked release date news about the next iPhone 12, Apple Watch Series 6, iPad 8, and much. In Jon’s latest leaks, he shares the Apple’s schedule for the press release dates, event dates, pre-order dates, and more.

According to Jon Prosser, Apple supposes to release Apple Watch Series 6 and iPad 8 through the Press Release on the Apple Newsroom. The company already made some Press Releases this year to launch several products earlier. So we cannot expect any special event this year like earlier as Jon predicted that Apple would make some announcement on September 7th.

Talking about the release of iPhone 12, Apple expected to announce four iPhone 12 models this year during the week of October 12th as Prosser shared the information about the iPhone 12 release in the 42nd week of the year. Also, he shared information about pre-orders and shipping as he shared that iPhone 12 and iPhone 12 Max pre-orders and shipping details that it will begin before the release of iPhone 12 Pro and 12 Pro Max. He claims that the iPhone 12 and iPhone 12 Max pre-order to start in the week of October 12th along with the devices shipping to the users in October 19th week.

At the end of the tweet, he also says that these dates could change in the future as Apple is still taking into account all four iPhone 2021 models and also considering the delay in production because of the COVID-19 pandemic. If anything changes and we hear from the reliable leaker Jon Prosser, we will update your new information about the upcoming Apple’s event and product releases.

What do you think about these leaks? Are you excited about the next iPhone 12 devices? If you have anything to share about Apple’s upcoming releases, please do share with us and other Apple fan through the comments.

Apple Banned Epic Games Fortnite, But Why?
iOS 14 Beta 4 New Features You Should Know About
Comment