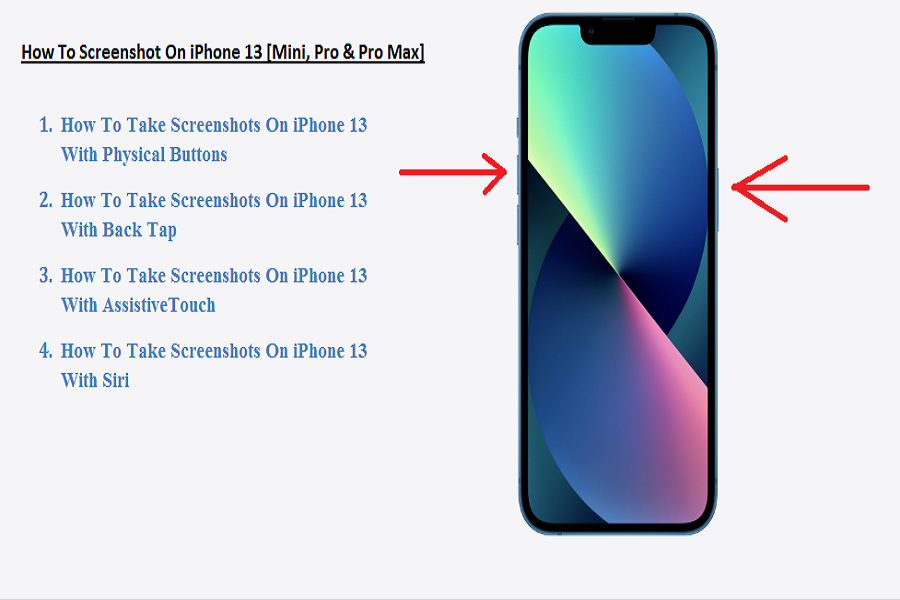 Taking screenshots has become standard these days. We see a lot on social media platforms, and sometimes we wish to have it as an image to share later with loved ones. The newer iPhone 13 series is also released recently with the screenshot feature, but most of the new users are now aware of taking screenshots on iPhone 13.

As a true Apple fan, we constantly provide every guide to our Apple product users. Today, we will show different methods to take a screenshot on iPhone 13, iPhone 13 Mini, iPhone 13 Pro, and iPhone 13 Pro Max. Without further talk, let’s check out each way.

Let’s start with the button method.

1.      How To Take Screenshots On iPhone 13 With Physical Buttons

One of the quickest and easiest methods to screen capture on iPhone 13 is the physical volume up and side button. To take a screenshot, press the Volume Up and Side (lock) button simultaneously. Once the screenshot is taken, you can also edit and then share it according to your need.

3.      How To Take Screenshots On iPhone 13 With AssistiveTouch

If you are not in a mood to use a physical button or AssistiveTouch or Back Tap to screenshot iPhone 13, you can use your assistance Siri on iPhone to take screenshots hands-free. All you need to command Siri “Hey Siri, take a screenshot,” and here it goes. It will capture the current screen on your iPhone 13 models.