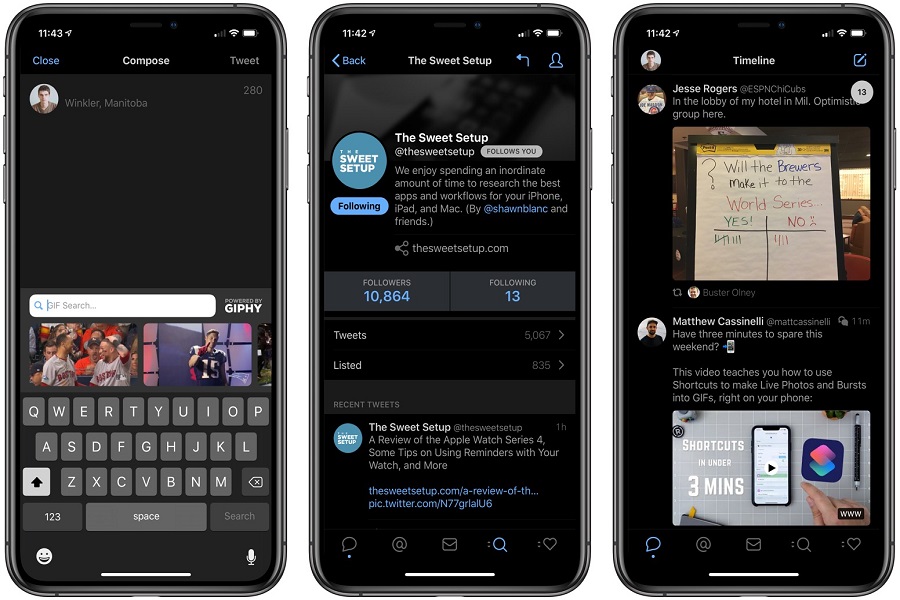 Don’t get confused by the title. There is an official Twitter app available for iOS devices too. However, not everything is as good as it should be, right? And, the same applies to the Twitter app for iOS. Don’t get us wrong, it gets the job done but it lacks a lot of unique customization and metrics-based features that some of the other third-party apps do.

However, the issue is that most people aren’t even aware of third-party Twitter apps. And, if you are one of those who wants to have a more enhanced Twitter experience, we have sorted out the top Twitter apps for iOS for you to look into.

Unless you are a developer or a tech geek who spends a lot of their time exploring different apps, there’s very little chance that you’d know about Circleboom Twitter. It is one of the most comprehensive Twitter apps that bring you access to a variety of account management and optimization tools.

From detailed statistics to the demographics of your audience, you can find a variety of cool features on this third-party app that isn’t available elsewhere. Also, it helps you track people who aren’t following you so you can take the necessary steps to remove them from your following list. If you want to indulge in advanced search, especially for locating your target audience, this app can help with that too.

As fun as the name of this app is, Twitterific is equally popular, if not more. This is for all those iOS users who like to engage with a more comprehensive and organized layout of the Twitter app. If you don’t want things to look all over the place, this is the app that can sort things out for you.

The app also sorts out your feed in a way that allows you to read through customized and promoted tweets first. The best part about using this Twitter app for iOS instead of the standard app is that it allows you to customize your feed according to your needs, which is always a great thing if you are a fan of personalization.

Although the name of this app might make it seem like an automated app that’s no good, Tweetbot comes with a variety of amazing features that you won’t find elsewhere. Besides the standard features, the app brings forth a variety of additional features that aren’t available on the official app.

From scheduling tweets to syncing your feed, you can pretty much do everything using this one app, which is always a benefit. Like the previous one, even Tweetbot gives you the choice to customize your timeline, making it a fun experience.

For users looking for a one-in-all Twitter app that streamlines their user experience, Tweetlogix is hands down the best pick in the lot. From following the right people to muting the ones you don’t want on your timeline, this is one of those Twitter app alternatives that works effortlessly.

What’s amazing about this platform though is the availability of customization options. It’s convenient and easy to navigate through, which makes it worth the time. Also, the platform is great for both beginners and professionals.

If you want better and more features but don’t mind pop-up ads, Echofon is hands down the best third-party Twitter app for iOS. It is a 100% free app but the best thing about this platform is the availability of image previews and push notifications, which aren’t available elsewhere. These are some of the features that are available in the premium version of Twitter Blue but you can access them all for free here.

For the users who technically use Twitter as a social platform rather than a microblogging site, Uber Social is the one for you. It provides users access to a variety of unique features, including the inner circle of friends that allows you to keep up with your close group of friends and keep a check on your close friends without any complaints.

Although quite an underrated option, Fenix is a third-party app that’s similar to the official one but with a lot of upgraded features. When it comes to the features, it offers a lot of diversity, including easy access to multiple accounts, and media clients and a well-organized layout, which is a lot different that what you’d get on the Twitter app.

Also, the user-friendly UI makes a good addition to the whole app, making it a lot more accessible than you’d think it’d be.

If you are particular about using a free third-party Twitter app, Janetter is an option that doesn’t disappoint. Offering a more fluent and streamlined user experience, Janetter is perfect if you want to have a more premium user experience on Twitter without having to pay the price for the same.

You can customize the layout, run multiple accounts and even keep track of the people who have unfollowed you, making things a lot more comprehensive than you’d expect them to be.

Last on the list of best Twitter apps for iOS is Listomatic. It is for all those users who want to bring decorum to their Twitter account and declutter unwanted following, tweets, and likes. The level of customization you get with this particular app is insane, allowing you to make the most out of your tweeting experience. The app is 100% free, which adds to the benefits further.

Overall, these are the top free Twitter app alternatives for iOS that we’d recommend you pay close attention to. Almost all of them come with premium features, allowing you to have the best user experience without any compromise at all. Also, you won’t have to worry about safety and usability since all these apps are available on the App Store, so they are safe and verified.