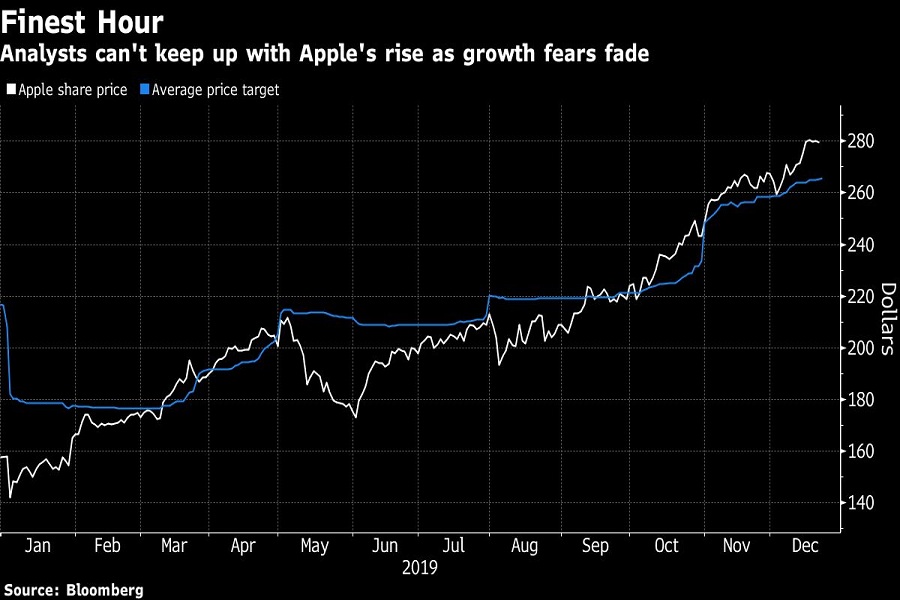 Since the release of 5G Android phones, iPhone fans were excited about the upcoming 5G iPhone. Many rumours about the 2021 iPhone 5G model reported. And now the great news for Apple investors as the Apple Stock hits record high ahead of 5G iPhone “Supercycle”.

According to Bloomberg, Apple’s first batch of 5G iPhones will open up the floodgates” on device upgrades, as well as the Wedbush Securities Inc. hinted awarding the company’s stock with a new Street-high price target. Hence, then Apple share price rose as much as 1% and was on track for a record-high close.

Analyst Dan Ives wrote that About 350 million iPhones within the Cupertino, California-based company’s 900 million installed user base are currently in the window of an upgrade opportunity,

We know that Apple’s first 5G iPhone to launch in September 2021. Ives also repeated his rating, while lifting his price target to $350 a share from $325, the highest among 49 analysts studied by Bloomberg and representing 25% positive aspect from Friday’s closing price.

Ives also wrote, praising the chief executive’s navigation of China growth struggles, while settling the firm’s long-standing lawsuit with Qualcomm Inc. and bringing to market the iPhone 11. The “historic” year will serve as a launch pad for 2021 to be the “year of an iPhone supercycle,” he added.

The most waiting next year’s first 5G iPhone is likely to kick off a “supercycle” of upgrade activity, the A Wall Street analyst on Monday said. So the Apple stock price gets new street-high considering the 5G launch in 2021.

According to IBD MarketSmith charts, the Apple share was at a very low point as a flat base at a buy point of 221.47 on Sept. 11. And now the trading is going really well with the 20%-25% profit-taking zone. So if you are the regular Apple stock trader, then I guess you got the great profit.

Apple is offering Apple Music “free subscription” for six months
Your iPhone may be tracking your location: How to stop that
Comment