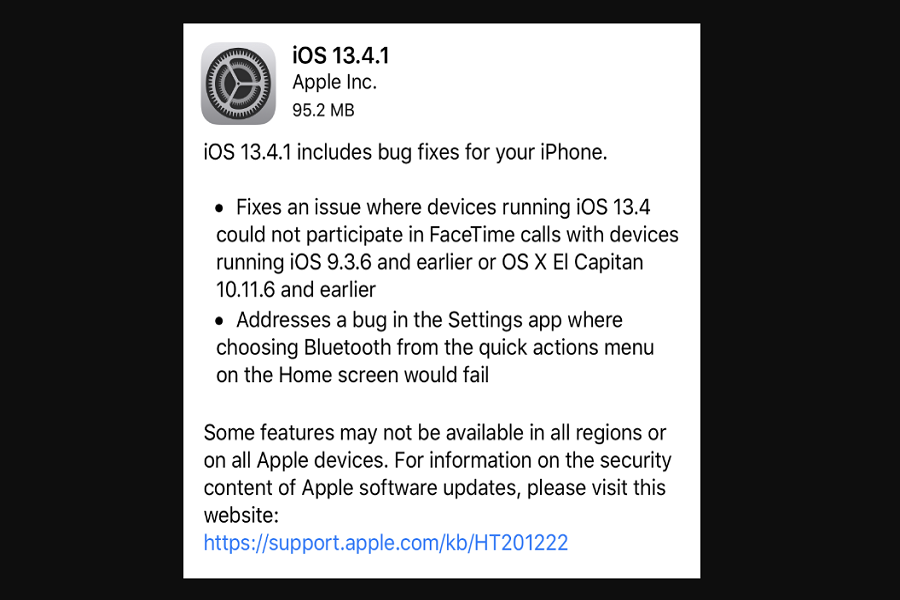 You might be wondering who’s new on iOS 13.4.1 or which new features added to the new iOS 13.4.1 update, then let me tell you that the update is all about fixing some minor bugs and performance improvements as well security enhancements.

Apple primarily releases this new update for those uses which has been facing the issue on iOS 13.4 from participating in FaceTime calls with devices running iOS 9.3.6 and earlier or OS X El Capitan 10.11.6 and earlier, according to MacRumors.

The new iOS 13.4.1 also came to fixed in the settings app that could cause choosing Bluetooth from the quick actions menu on the Home screen to fail as well as the iPadOS 13.4.1 fixes an issue on the 12.9-inch iPad Pro (4th generation) and 11-inch iPad Pro (2nd generation) where the flashlight may not turn on after tapping the Flashlight button in Control Center or on the Lock screen.

If you want to install iOS 13.4.1 update, then you can go to the Settings app and selecting “General” and then tapping on “Software Update”. If you have activated automatic updates, then you will get the notification to download the latest update.

With the last update iOS 13.4, Apple gave the huge update and added some new major features to make the device more useful and fruitful. After updating to the new iOS 13.4.1 or iPadOS 13.4.1 on your Apple device, please do not forget to share your experience with us in the comment box. You are also free to tell us which feature you still miss in the update and do not forget to share any bug if you found in the latest iOS 13.4.1.

How To Lock Netflix Profile on iPhone, iPad, and Apple TV
Apple’s iPhone 9 Spotted On The Chinese E-Tailer Website Before The Launch
Comment