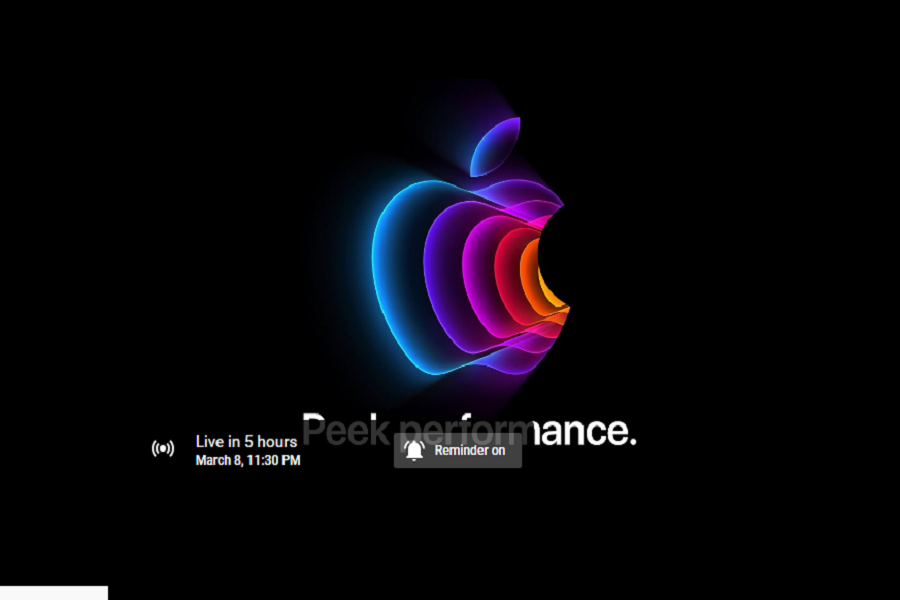 The announcement by Apple has created a lot of interest among customers. Apple’s March event has been rumoured for quite some time, with sources claiming that the firm would present a new iPhone SE model, a new iPad Air, and perhaps a Mac product. Now that the event has been confirmed, let’s take a closer look at what Apple is likely to unveil in this event, as well as the ‘one more thing’ that the company has mastered over the years. Although Apple’s spring events aren’t always as thrilling as those in September and October, it’s comforting to know that new products are on the way in the new year.

The event is named “Peek Performance” by the company.

APPLE MARCH EVENT: WHERE AND WHEN?

Apple today announced that its first event of 2022 will take place in the Steve Jobs Theatre on the Apple Park campus in Cupertino, California on Tuesday, March 8 at 10:00 a.m. Pacific Time.

Apple’s event will be streamed directly from apple.com.

It will be available as a live webcast beginning at 10 a.m. PT, 1 p.m. ET and 6 p.m. GMT. The event will be broadcast live on both Apple’s website and YouTube.

A SNEAK PEAK INTO THE APPLE EVENT

Due to the ongoing public health crisis, Apple’s first event in 2022 will be a digital-only event, with no members of the media invited to attend in person, as it was in 2021.

We’ve already heard a lot of speculation about what to anticipate during the March 8th event. We’re anticipating a range of products, including a new iPhone SE and iPad Air 5, as well as one or more new Macs, the latter of which is likely to use the rumoured Apple M2 CPU.

A 27-inch iMac Pro, a redesigned iPad Pro 2022, a Mac mini-2022, and perhaps a new affordable Apple Studio display are all plausible announcements. Apple might possibly release a new iPhone 13 colour, as well as improvements to popular Apple services and more, are all likely to be announced.

According to a source close to Apple, the Apple Studio Display will be unveiled during the March 8 event.

Mark Gurman, a well-known Apple insider, reports that Apple has been testing its new M2 CPUs ahead of today’s Apple presentation.

The third-generation iPhone SE will resemble the current second-generation device, with no significant design changes predicted. Apple’s current iPhone SE is modelled after the iPhone 8.It will have thick bezels and a Touch ID Home button and a 4.7 – inch LCD display, but an upgraded A-series processor, most likely the A15, and quicker 5G connection will be included. The pricing of the 3rd Generation iPhone SE is expected to stay at $399. Apple analyst Ming-Chi Kuo predicts that it will have the same design as the iPhone X, but with two major improvements: 5G and a faster CPU.

Wireless charging will be supported, but we don’t expect MagSafe. The current iPhone SE comes in black, white, and red, and we may expect similar colour possibilities in the future.

The iPhone SE’s improvements are completely internal, since there are no design changes on the horizon. It is being predicted to have a speedier chip, and the iPhone SE might have the same A15 chip as the iPhone 13, which would result in a significant performance boost. Apple is expected to offer 64, 128, and 256GB storage choices, starting at 64GB.

The only other rumour we’ve heard regarding the iPhone SE is that it could feature an improved camera, similar to the iPhone 13’s Wide camera.

A new iPad Air is in the works, but unlike the iPhone SE, no design changes are planned. The next-generation iPad Air will appear similar to the present iPad Air, however there’s a chance that additional colour options could be available. Purple has been mentioned as a possible new colour option for the iPad Air.

According to rumours, much of the iPad Air upgrade would focus on bringing the gadget up to speed with the sixth-generation iPad mini, which was introduced last autumn. This means the iPad Air might get an updated A15 CPU. However, there is a speculation that Apple will add the M1 processor from the iPad Pro to the iPad Air, bringing performance up to line with Apple’s higher-end tablets.

Apple will add 5G connection to cellular iPad Air models, allowing the tablets to function with speedier 5G networks. We can also expect for having 4 speakers versus 2, center stage support for video call, camera improvement, video recording will finally be supporting 1080p in 25fps and 30fps. It is expected to have standard wide and ultra-wide angle camera lenses.

The iPad Air’s pricing is expected to remain the same, meaning the next model might start at $599 for 64GB of storage.

As part of an update to the overall Mac line-up, at least one new Mac with Apple Silicon SoC is likely to be shown during the event. In terms of Macs, Apple is reported to be working on a higher-end Mac mini with a redesigned design and M1 Pro and M1 Max CPUs. The next Mac mini might debut during Apple’s March presentation, replacing the current Intel Mac mini alternatives.

Apple will announce a new MacBook Air with a new M2 chip at this event. The M2 chip will have the same 8-core CPU as the M1, with performance and efficiency improvements, as well as GPU upgrades, are planned. According to rumours, the M2 chip will include 9 and 10-core GPU choices, as opposed to the original M1 chip’s 7 and 8-core GPU possibilities.

The last product anticipated for March 8 is an improved 13-inch MacBook Pro with an M2 chip, which is the successor to the M1. The MacBook Pro will be a lower-end variant of the 14 and 16-inch MacBook Pro models with M1 Pro and M1 Max CPUs, and will appear identical to the present 13-inch model.

Apple introduced a purple iPhone 12 to the iPhone 12 selection last year, and speculations say that a green variant may be offered this year. The iPad Air will also be available in a new purple hue, according to the same source.

According to Bloomberg’s Mark Gurman, a “Mac Studio” machine that is a “smaller Mac Pro / more powerful Mac mini” is “ready to go” and might debut at the spring event.

Apple is working on a replacement to the Pro Panel XDR as well as a cheaper consumer-oriented display, with the latter model having a possibility to be unveiled in this event.

YouTuber Luke Miani, who has a track record of correctly forecasting Apple’s plans, claims that the new 27-inch consumer display will be dubbed the “Studio Display” and will be unveiled during the event with a “Mac Studio” computer.

Overall, Apple’s event promises to be a fascinating start to the company’s yearly upgrade cycle, preparing the ground for expected phone and computer updates later this year.